Another mystery in need of solving: "Tadmore 77" 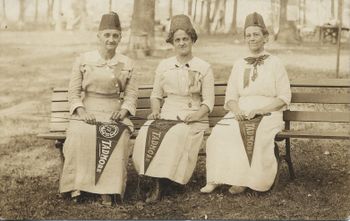 Once again, we're calling on our readers to help us out. Most of the time, we're pretty good at identifying even the most challenging items in our collection, but sometimes we're just plain stumped. That's the case with the postcard shown here. So, we're asking our readers whether they might have any leads - or, even better, outright identification - on what group the three women shown on this real photo postcard are affiliated with.

Here's the visual evidence (for a better look, click on the image above and a larger version will open in another window):

All the women are wearing fezzes. The fez on the woman in the center reads "Tadmore 77."

All three are holding banners in their laps. The banner on the left is different from the other two and appears to have the letters P and B as part of an intricate circle surrounding the number 77. The other two banners are identical to each other - on the banner held by the woman in the center, one can read the word "Picnic" as well a possible date - 191?. The last number in the date is obscured by the stick that the banner is attached to.

All three women are also wearing ribbons which may commemorate the event that they are attending. Unfortunately, the text of the ribbons can't be read, even under magnification.

The final visual clue is the pendant hanging around the neck of the woman seated in the middle. The pendant appears to be in the shape of a keystone, a symbol traditionally, though by no means exclusively, associated with the Royal Arch in Freemasonry - but also, of course, associated with Pennsylvania. Pennsylvania is known as the Keystone State, so the keystone might be related to where this photo was taken and this postcard most likely comes from Pennsylvania (see next paragraph).

Another lead appears on the reverse of the card, which includes the stamp of the photographer presumably responsible for this real photo postcard. It reads "W.D. Rishel, Photo, 319 N. 9th St. Reading, PA."

Here's what we're thinking so far, based on the evidence: These women were possibly at an annual picnic, somewhere in the Reading, Pennsylvania area, sometime in the nineteen teens. But what group were they with? Were these women members of an auxiliary Masonic group? A sorority? A woman's club? A coed fraternal group?

If you have a lead, no matter how slim, please let us know. We'll give credit where it's due if someone helps us identify what group these women belonged to.

Posted at 09:00 AM in Fraternal groups (not Masonic), Freemasonry, Freemasonry and Women, Postcards, Posts by Jeff Croteau, Tadmore 77 | Permalink | Comments (7)

How exciting! Many thanks for your comment. I agree that these two items sound like they are very likely related. Your addition of the word “Siesta” helped me turn up this news item, which, while thirty years later, places Tadmore Siesta No. 77 at a picnic in Reading, PA: http://news.google.com/newspapers?id=J70hAAAAIBAJ&sjid=tJwFAAAAIBAJ&pg=2298%2C4608400. It also confirms that this was a Knights of Malta side degree. I’m sure with some more digging (offline and on) I can probably come up with more that will help confirm that the women in the photo were members of Princes of Bagdad, K. of M. Tadmore Siesta, No. 77. Thanks again for writing and helping us get a lot closer to solving this mystery!

We have a new item in the Plastics Collection at Syracuse University that may be linked. It is celluloid a pin cushion on which is inscribed in Old English script "Princes of Bagdad, K. of M. Tadmore Siesta, No. 77." Here was have the Tadmore 77 (with an e), on an object used by women, and associated with the Princes of Bagdad, K. of M. (presumably Knights of Malta?). The piece was manufactured by Whitehead & Hoag of Newark, NJ (founded 1892), almost certainly before WWI. I would be happy to learn more about this item
--- Sameul D. Gruber, Curator, Plastics Collection, Syracuse university.

I'm glad I can help in any way. I'm not sure about the history of LOS because I'm not a member, but they do wear the fezzes.

Very interesting blog, by the way. I forgot what I was searching for, but I found this through a google search on something Masonic related.

Thanks for your thoughts - especially for the reminder that women do wear fez. The LOS avenue seems like a good one, although the dates and location still don't quite add up. Tadmor Shrine in OH wasn't chartered until 1925. A few Shrines were founded in 1877, including Syria Temple in Pittsburgh. Still, it doesn't all quite add up - especially that Tadmore with an "e" at the end. Still, your thoughts are helpful and any tip helps! Thanks for writing.

These ladies are probably Ladies Oriental Shrine (LOS) members (http://www.ladiesorientalshrine.org/). They wear fezzes and long dresses like this.

I do not know how old LOS is, but I think it's older than Daughters of the Nile (which I am a member of).

Many thanks for your thoughts on this postcard. Your thoughts are similar to ones I had when I first looked at it. Here's why I eventually ruled out the possibility of a connection to the Shrine, specifically in Akron.

Because the fez is such a familiar badge of the Shriners, this was my first avenue of research, but none of it quite added up. First, it would be highly unusual for women to be wearing fezzes, even if this were a Shrine event. Secondly, the Tadmor Shrine in Akron wasn't chartered until 1925 and it appears from the visual evidence on these postcards that this photo is likely from the teens and potentially from the Reading, PA area. It also appears that the Tadmor Temple in Akron has always spelled their name without the final "e." And, finally, there have been, in fact, a number of groups that wore fezzes, not just the Shriners.

You're correct, of course, that Tadmore is a biblical reference and there is certainly no shortage of biblical references - especially related to Solomon - within Freemasonry, so that remains tantalizingly suggestive.

Again, thanks for your thoughts on this!

I think the ladies pictured in their Fezzes may be Shriners.

There's a Tadmor Shrine Temple in Akron Ohio, founded I think in the 1870s. Could the "77" refer to 1877?
Has the spelling changed from Tadmore to Tadmor (now)?
"Tadmore" is a biblical reference to a city build by Solomon in the 10th century BC.(Second Book of Chronicles 8:4)

Are the ladies nurses at the Shriners Hospital (founded 1922),or perhaps they're family members attending a fundraiser for the Hospital's foundation and representing Tadmore?

All musings on my part, and I hope some of it helps