Like the Bostonians who protested the 1773 Tea Act, Lexington residents took issue with the  act that gave the East India Company a lock on the tea market in the colonies by exempting that company from paying a duty on the tea they exported to the colonies.  These colonists disagreed with Parliament’s privileging the East India Company (and thus impeding local businesses’ ability to turn a profit selling tea) and objected to Parliament taxing subjects without their input. 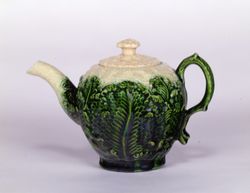 In early December 1773, Lexington voters gathered to discuss "the tea sent out of the East India Company to be sold in America subject to a duty imposed by Act of Parliament."  As often happened at a meeting of Lexington freeholders, the group appointed a committee to put together a report on the topic for the town to consider and discuss.  On December 13, voters passed a hotly worded resolve against the Tea Act, describing it as a “... Measure to distress, Enslave and destroy Us.”  To this resolve, they added a statement declaring, “That if any Head of a Family in this Town or any Person shall from this time forward and until the Duty be taken off purchase any Tea or use or Consume any Tea in their Families such person shall be looked upon as an Enemy to this Town and to the Country and shall by this Town be treated with neglect and Contempt.”

Further expressing their outrage and resolve, as a Boston newspaper recounted, Lexingtonians “… brought together every ounce [of tea] contained in the town, and committed it to one common bonfire.”  Published in the Massachusetts Spy on December 16, 1773, this account confirms that Lexington residents were ahead of the curve when it came to protesting the Tea Act.