New to the Collection: The Ancient Order of Good Fellows 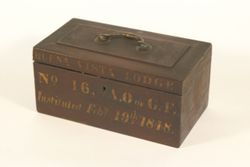 Recently, the National Heritage Museum acquired a mahogany box, which was found in Chester County, Pennsylvania.  Topped with a brass handle, the box has gold painted letters on the front reading, “Buena Vista Lodge / No. 16, A.O. of G.F. / Instituted Feby. 19th, 1848.”  Identifying the group that originally used this box was the first task in adding this object to the collection.  The only clue was the initials on the box – “A.O.G.F.”  Through an internet search, we identified it as the Ancient Order of Good Fellows, but standard sources on American fraternal groups, like The Cyclopedia of Fraternities by Albert C. Stevens, offered no listing for the group.  Collecting objects from groups like this – which are not widely, or even moderately, known – is an important goal for the Museum.

The hunt was on to learn more about the Ancient Order of Good Fellows.  An 1884 history of Philadelphia included the short note that AOGF Lodge #1 was organized in 1840 in that city.  Another 1884 source, a history of Pennsylvania’s Montgomery County, which borders on Philadelphia County, explained that “the Ancient Order of Good Fellows was transplanted from the city of Philadelphia May 17, 1869 when Buena Vista Lodge, No. 16, was organized.  This lodge has been extraordinarily successful, the membership now reaching one hundred and seventy.”  While this reference helps to establish that the lodge named on the box existed, it also adds confusion, suggesting that Buena Vista Lodge No. 16 was formed in 1869, not the 1848 date painted on the box itself.  Was Lodge No. 16 initially formed in Philadelphia in 1848 and then moved – or “transplanted” as the history book reads – to Montgomery County in 1869?  Or were AOGF lodges numbered within counties, rather than within the state?  This would mean that there was another Buena Vista Lodge No. 16 in Chester County where the box was found.  These questions remain unanswered until additional evidence is uncovered.

Regardless of where the lodge was located, the group seems to have been a mutual benefit society.  The Montgomery County history explains that Buena Vista Lodge “has paid out in benefits the sum of $10,316.66, as follows: Weekly Benefits, $9246.66; funeral benefits, $1070.”  Before insurance companies, societies like this one offered a safety net for their members.  Those who belonged paid fees on a regular basis and were entitled to benefits should a problem or crisis arise.  Regardless of its success in the Philadelphia area during the 1880s, the Ancient Order of Good Fellows seems to have been defunct by 1924.

In my collection, I have two Ancient Order of Good Fellows ribbon badges from Golden Rule Lodge No. 42 in Strouchsburg. Both hand pin tops with crossed arrows and the group name, short ribbons with the local names, and dangle disks with an open hand, the letters T.E.R.A.M. and Ancient Order of Good Fellows. One is a yellow regular member badge, white with a red strip, and the other is yellow with a staff dangle from the top, probably a officer badge.

I also have a plain white silk with “Wyoming Lodge No. 2, Ancient Order of Good Fellows, Rohrsburg, Penna.” plus a flying U.S. flag design.

This order, apparently strong in PA and nearby, was probably one of many Us breakaways from a parent English order, slightly relabeled and invariably stressing US loyalty.

Unfortunately, I seem to have no ephemera from this group, such as a constitutio or ritual or proceeding that would tell more. But the Strouchsburg badges are very nice!

Thanks Barry! It's fantastic that you know so much about this person. I still haven't found much more on the AOGF aside from what I wrote here. I am hoping that more objects and information will come the museum's way. Thanks for reading our blog and commenting. Aimee Newell, Director of Collections

One of my ancestors, David Cashore (1836-1873), lived in Glocester, NJ and also in Philadelphia and was a member of Charity Lodge #12 A.O.G.F. Glocester, NJ according to his obit.

Thanks so much for reading our blog and commenting! I'm glad to know that the Good Fellows still exist in the UK and in other places. I hope you enjoyed the chance to see this box. Aimee Newell, Director of Collections

The order of Good Fellows is still running in the UK. Originally it was for unskilled workers and operated like the Masons. The headquarters of the organisation is in Stafford in the UK. It still has groups around the world.
I am a member of the Goodfellows.

Hello: Thanks so much for this information! I'm thrilled to learn more about this group. I will add your comment to our research file for the box. Thanks for reading our blog. Aimee Newell, Director of Collections