Philip Zea of Historic Deerfield Speaks on Clockmaking in New England, Saturday, November 21 at 2 pm. Free
"Mister Mason was a Mason and a good one too"

You Sank My Battleship! 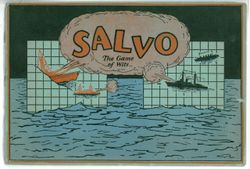 The phrase above is familiar to anyone who played the game Battleship as a child.  But, did you know that the Battleship game dates back to the World War I era?

Recently, the National Heritage Museum was given “Salvo: The Game of Wits,” an early precursor to the now-familiar Battleship game with its plastic boats and electronic sound effects.  While the exact origin of the game is uncertain, some sources suggest that Russian soldiers invented it shortly after World War I.  The Starex Novelty Company, Inc., of New York, first produced the version known as “Salvo” in 1931.  The Museum’s copy of the game is marked with the retail price of $1.

The game was played on paper – the game sheets have printed grids and are tucked into a folder; you can see the front cover here.  Two people would face off head-to-head by marking their ships on the gridded game sheet.  Then, the players would take turns calling out the number of one of the grid squares, which would be considered “hit” by that player’s salvo.  Whoever sank the opponent’s boats with the fewest number of salvos won the game.