The Boston Globe Interviews Dick Curtis About Masons and Their Secrets
James Green Speaks On "The Experience of Work in the American Industrial Age," Saturday, November 14 at 2 pm. Free

New to the Collection: A Masonic Quilt 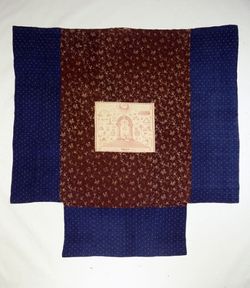 So often quilts saved from the 1800s are ones that were only used on special occasions – quilts that were made not as warm bedcoverings, but as family keepsakes or gifts, or that held special meaning for the maker.  This quilt, a recent acquisition by the National Heritage Museum, presents a more utilitarian example.

While in good condition, the style chosen and fabrics employed in the quilt suggest that it would have kept a family warm, while hiding the dirt that was sure to accumulate over time.  The shape of the quilt, known as the “T-shape” due to its cut-out corners, is a distinctive New England trait.  Although some quilts from the 1800s with cut-out corners were made in other regions of the United States, studies have documented far more examples of this shape in New England.

The brown floral print in the center section was probably sold as dress goods.  The side and bottom borders are made from an indigo fabric with an overall white dot and periodic leaf motif.  The quilt is serviceably backed with coarsely woven cream linen.  The quilting is done with brown and blue thread, depending on the area, so that the stitches would blend into the fabrics.  The blue borders show a chevron quilting pattern, while the brown section is quilted in squares with parallel lines. 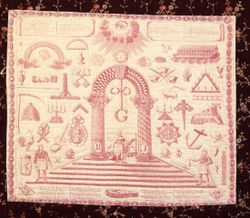 An unusual feature of this quilt, the Masonic handkerchief applied to the center, dates to about 1817.  The blue and brown fabrics also appear to date from the late 1810s, suggesting that the quilt was made between 1815 and 1820.  Printed in red, the handkerchief depicts an arrangement of many Masonic symbols with verses at the top and bottom.  Unfortunately, the maker’s motivation for including the handkerchief on the quilt has been lost, as has her name.  While it seems fairly safe to imagine that the original owner was a Freemason, or related to a Freemason, the handkerchief is also an interesting choice based on prevailing quilt style of the period.  Medallion quilts – those with a central design, often pieced or appliquéd – were popular during the 1810s and 1820s.  The addition of the handkerchief in the center of the quilt may reflect the maker’s desire to replicate that fashion in a time-saving and cost-effective manner.  Although women could not become Freemasons themselves, those who were married or related to Freemasons often expressed familiarity with Masonic symbols in their quilts or other creative endeavors (see our previous post on the quilt by Jane Haight Webster).