James Green Speaks On "The Experience of Work in the American Industrial Age," Saturday, November 14 at 2 pm. Free
Can you help us solve this mystery?

Stricken with Palsy in the early 1800s! 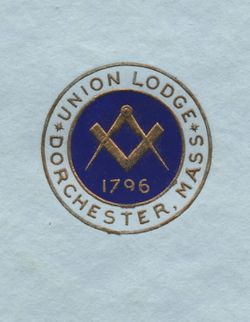 In 1808, William Lepear wrote a desperate letter to Union Lodge saying that he had been "smitten with a stroke of the palsy which rendered his right arm and leg entirely useless, an in a great measure deprived him of speach [sic]" (see image below). He had been living off his family land since 1804.  By 1808 he had depleted his funds and turned to his Union Lodge brethren for charity.  According to a Union Lodge minute book, on November 1, 1808, William Lepear's request was voted on by the members.  It is clear that the members voted in favor of helping out Lepear, because they collected $10.50 for this Brother and his family. 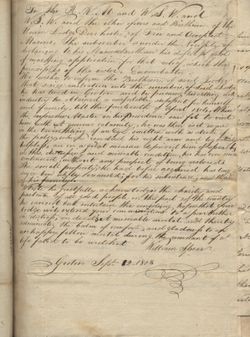 Masonic charity comes in many forms. In a July 1803 letter to Union Lodge, Victor Blair of Charlestown petitioned for charity relief funds because his business had gone bankrupt. Blair described the early part of his life as devoted to the "services of his country in the American army." On August 2, 1803, the Union Lodge met and reviewed Blair's letter and decided to take up a collection to help out this Masonic Brother, according to a minute book of Union Lodge.  The lodge collected $3.73 for Victor Blair.  Though this may seem like a small amount, in the  1800s it would be considered a good sum.

Joseph Howe wrote a letter to Union Lodge in 1812, asking for charity relief.  He had been captured by the British on November 11, 1812 , during the War of 1812, and had surrendered all of his "tools and fruits of his labor for many months."  He asked Union Lodge for fraternal relief and to save him "from the last fatal act of desperation!"  That is, he was asking for relief funds to get his trade going again so that he could support his family.  On January 12, 1813 Union Lodge collected $8.10 for Howe as recorded in the minutes of the Union Lodge.  The secretary of Union Lodge was asked to give the money to Brother Joseph Howe.

As well as charitable relief to many, the Union Lodge also consoled many grieving widows of fellow Masons.  The minutes of July 1, 1809 record that the lodge had a special meeting to discuss the death of Joseph Gardner, Senior Warden. They held a procession to the cemetery and gave him a Masonic burial.  As noted in the minutes, "a procession was formed under the care and direction of the R. W. Brother Henry M. Lisle and W. Brother Sam B. Lyon Marshall of the lodge marcht witih solem musick from Union Hall to the House of Mourning and from thence to the Place of enternment, where the masonick solemenities were performed [sic]".   A committee was formed to write Mrs. Ann Gardner a proper letter of condolence.  A copy of the sent letter was kept by the lodge and it was recorded in the July 25, 1809 minutes that this letter was sent and that Mrs. Gardner responded. The letter of July 1, 1809 from Union Lodge, is a beautiful one that is three pages long!