Freemasonry Unmasked! - An exhibition about anti-Masonry
Leo Taxil and Baphomet 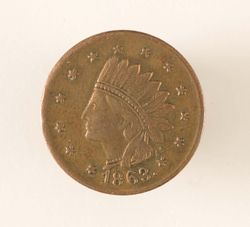 One of the most interesting parts of working with objects in the collection is that you think an item might be one thing, but then it turns out to be something completely different.  For example, this coin appears to be an 1863 Indian head penny, but when we turn it over, we see it is a Civil War-era token.

In response to the hoarding of United States silver and gold coins between 1862 and 1864, merchants hired private minting companies to make these tokens, which were used by Americans as a form of currency.  To prevent the stockpiling of these tokens, most were made out of non-precious metals, such as bronze, tin and copper, which were common and held little monetary value.  From 1862 to 1864, more than 10,000 varieties of Civil War tokens were created and the total number of coins made numbered into the millions.

This token, which the National Heritage Museum recently acquired, includes the name of the merchant that had it made: J. Wightman at 188 Washington Street in Newark, New Jersey.  Other tokens made around the same time have patriotic insignia, like the American flag, or slogans, such as “Union For Ever.”

Although the American public widely accepted these tokens as currency, they were only used for a short time.  Merchants could refuse the tokens.  In 1864, after legal tangles around the acceptance of these coins, Congress passed the Coinage Act.  Most notably, this Act introduced the phrase “In God We Trust” onto coins.  It also changed the metal composition of the one cent and two cent coins, giving them the same weight and feel as the familiar Civil War tokens.  As a result of these changes, people hoarded the newer currency less than the old gold and silver coins and accepted it more than the Civil War tokens. 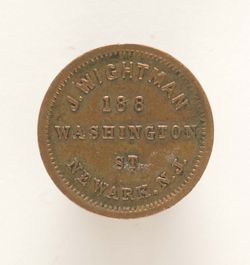 Thanks so much for sharing this information with us. I will definitely make a note in the research file for this object! And, thanks for reading our blog.