New to the Collection: An Ancient Maul 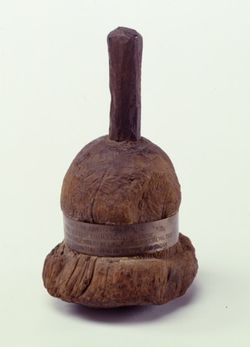 Recently, National Heritage Museum staff began to review the extended loan objects that had accumulated under their roof.  Many of these loans dated back to the early years of the Museum, before its own collection could support exhibitions and research projects.  After three decades, the time seemed right to assess each loan for its relevance to the Museum’s mission and core priorities.  In many cases, the objects on loan were determined to be one of a kind, offering fascinating possibilities for research, exhibits, and public programming.  So, Museum staff began to ask their owners whether they might consider turning these loans into gifts for the permanent collection.  One of the first generous lenders to accept this proposal was Occidental Lodge in Stockbridge, Massachusetts.

Back in 1977, shortly after the Museum opened, Occidental Lodge placed a maul on loan to the Museum.  As you can see in the picture, a maul is a heavy wooden-headed hammer, often used to drive wedges.  This maul has an applied metal band that helps to tell the story of its significance, inscribed “Ancient Egyptian Maul Presented to Occidental Lodge by R.W. Brigadier General C.S. Wilson CB, CMG, DSO, District Grand Master of Egypt and Sudan.”  In Freemasonry, the setting maul is a symbol of untimely death.

Occidental Lodge was formed in Stockbridge, Massachusetts, in June 1870 when the Grand Lodge of Massachusetts granted the petition of twenty-three Masons from that town.  These men set the purpose of the lodge, “to promote and diffuse the genuine principles of Freemasonry; for the convenience of our respective dwelling, and other good reasons.”  The lodge grew steadily during the late 1800s and early 1900s, initiating members, pursuing charitable activities and meeting regularly.

During these years, Occidental Lodge received a number of gifts, which they preserved as treasures.  In addition to their officers' jewels, a set of Receiving Tools and several ceremonial gavels, in July 1928 the Lodge received the maul.  The previous fall, at an October 5, 1927 Special Communication, the Lodge was visited by its presiding District Deputy, along with Brigadier General Charles S. Wilson, then-District Grand Master of Egypt and Sudan for the Grand Lodge of England.  Unfortunately, lodge records do not reveal the occasion for Wilson’s visit to western Massachusetts, or what prompted him to make this gift.  Instead, the gift of the maul is recorded as “a token of his esteem.”  Wilson was the fifth District Grand Master after the District Grand Lodge of Egypt and Sudan formed in 1899.  He succeeded his predecessor in 1926, after that man was assassinated on a Cairo street.  Wilson served as District Grand Master until his death at sea in 1933.

According to Wilson, this setting maul was found in the funeral temple of Pharoah Djoser (also known as Zoser), whose reign extended from about 2630 B.C. to 2610 B.C.  The funeral temple is part of the Step Pyramid at Saqqara, Egypt.  Built under the direction of Pharoah Djoser during his reign, by the architect Imhotep, the pyramid was the largest building of its time, standing 204 feet high with six stepped layers.  The structure was intended to hold the Pharoah’s mummified body after his death.  The Museum is pleased to add the maul to its collection – it becomes the oldest item in the collection.

Hi Will - Thanks for the compliment. My initial reaction, when I read your comment, was to think, "Both!" Or, really, I suppose both 1928 CE and 1300-2000 BCE, when we think the maul was made. For our purposes, its story from the 1928 period may end up being more often related to our exhibitions and research, but I think it's important to rememeber the maul's entire history. And, certainly, it could be used to represent any number of ideas and themes from 2630 BCE to its donation in 2008.