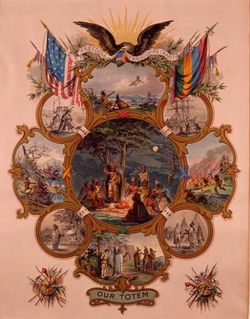 To fully understand and appreciate Freemasonry in America, the National Heritage Museum collects objects and documents associated with all types of fraternal organizations.  This chart visually presents symbols and goals of the Improved Order of Red Men.  Founded in Baltimore, Maryland, in 1834, and modeled on the Independent Order of Odd Fellows and Freemasonry, the group took idealized notions of Native American life as their inspiration.  Red Men met in “tribes” at “wigwams” and practiced rituals based on romanticized views of American Indian legends.  Ironically, the group was initially open only to white men.  Members likely set this exclusion in place as a reaction to rising immigration to the United States.

The Red Men also wore “Native American” regalia, with fringed leather pants and shirts and feather headdresses.  Their costumes suggest a connection to late-1800s historical pageants, which celebrated centennials and bicentennials of white settlement in the New World.

Decorative prints like this one were popular during the late 1800s and early 1900s.  Used in the home and by the fraternity, this print reminded the member of the lessons he had learned and signified his membership to others who might see it in his home.

Hello Anne: Thanks so much for reading our blog and commenting. This definitely sounds like a cane associated with the Improved Order of Red Men. Do you know if your great grandfather was a member? From the inscription, it sounds as though the cane was presented to its original owner for some kind of occasion or recognition. The IORM still exists and has a headquarters in Waco, Texas. They may be able to tell you where St. Tamina Tribe No. 56 was located. Please let us know what you find out, or if we can answer any additional questions. Aimee Newell, Director of Collections

I forgot to say that Joseph Schweitzer lived in Baltimore, Maryland.

I have a walking stick that belonged to my great grandfather, Joseph F Schweitzer. The top seems to be gold and is enscribed St Tamina Tribe No 56 Imp'd ORM. Committee C.W.Gilbert, J.G.Murphy,Frank H Jarrett. There is also a crest with crossed sword and hatchet. I wonder if you could give me any information.