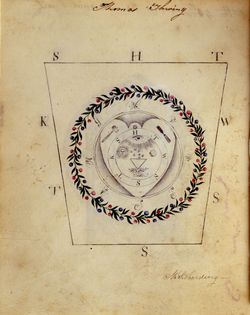 The King Hiram Royal Arch Chapter mark book (1825-1838) is a key Masonic treasure for both exhibition and research at the National Heritage Museum.  Because of renewed interest and fresh research related to this particular manuscript volume (as seen in three previous blog posts by National Heritage Museum staff members), the Library and Archives decided to explore the possibilities of having conservation work done on this object. The mark book contains the "marks" of men who received the Mark Master Mason degree in King Hiram Royal Arch Chapter in Greenwich, Massachusetts. The book is nearly two hundred years old and it shows its age: the book's binding is detached and the beautiful pages with watercolored Masonic "marks" are coming loose. I contacted Northeast Document Conservation Center and spoke with Deb Wender, Director of Book Conservation. We spoke about the mark book and what type of repair it needed.  We then sent the item to NEDCC via US Art, a company that transports fine art, so that the NEDCC staff could physically evaluate the object and provide us with cost estimates for different conservation treatments.

Soon thereafter, I received a treatment proposal from Mary Patrick Bogan, Senior Book Conservator at NEDCC.  This treatment proposal first described the condition of the piece upon receipt.  Bogan described the bound manuscript as worn and deteriorated.  The paper and leather were detached from the frontboard and backboard.  The binding was nearly detached.  The watercolored pages were dirty, discolored, acidic, and stained. She described the paper as flexible, however some of the pages had small tears and were cockled along the edges.

The second part of the treatment proposal contains the recommended conservation treatment. Bogan describes step by step how repair will proceed.  NEDCC always provides both a written record of treatment plus before and after conservation photographs. The pages of the mark book would be collated where necessary, vacuumed, and surface cleaned to remove loose dirt.  Then the item would be disbound, removing the sewing and separating the sections.  Stains along the folds of the pages would be treated using moisture.  The blank pages at the end of the item would be washed in water to clean and reduce acidity.  The pages with watercolors would be alkalized by immersion in a calcium hydroxide bath to protect the paper from formation of acid in the future.  Small tears in the pages would be repaired with Japanese paper and wheat starch paste.  The text would then be reassembed and pressed to flatten.  Linen thread would be used to sew the pages into sections. 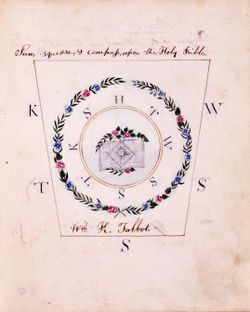 Bogan gave me two options for the binding of the mark book. First she proposed to bind the manuscript in cloth using a case structure.  The second option would be to repair the existing binding by rebacking the piece with airplane linen and Japanese paper and constructing a custom-made storage box for it.

After further discussions with Bogan, we decided to move forward with the recommended treatment of the piece. We chose the second option for rebinding the manuscript because this will preserve the mark book's artifactual value as well as the inner informational value.

The mark book will likely be at NEDCC for six to eight months.  However, after the conservation work is complete and item returned, we will have a Masonic treasure that is more physically stable, has a longer life, and has its future ensured at the museum!

The information about the restoration/conservation process is fascinating. I'd love to see more post in this vein.
(Thanks, Catherine!)