Freemasonry Unmasked! - An exhibition about anti-Masonry 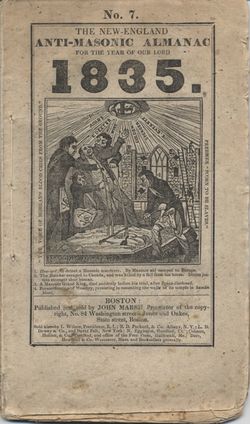 Freemasonry Unmasked! features forty objects from the Library and Archives collection, ranging from 1700s and 1800s ritual exposures to an anti-Masonic comic book from 1978. The topics covered in the show include early ritual exposures, the “Morgan Affair,” the Anti-Masonic political party of the late 1820s and early 1830s, late 19th-century American anti-Masonry, European anti-Masonry perpetrated by the Nazis during World War II, and anti-Masonry from the past fifty years.

Over time, anti-Masonic propaganda has taken many forms. Exposés of Masonic ritual first appeared in the early 1700s.  In the 1820s and 1830s, following the kidnapping and presumed murder of a former Mason who threatened to publish an exposure of Masonic ritual, Americans began producing anti-Masonic newspapers, almanacs, broadsides and other pieces. During this same period, a political party that promoted anti-Masonic candidates formed.

Pictured above is the cover of an anti-Masonic almanac from 1835. The woodcut on this almanac’s cover highlights the central role the press played in spreading the fear of Freemasons. In the detail on the right, you can see the all-seeing eye, a common Masonic symbol, depicted with a printing press in the center, casting light upon the alleged darkness of Freemasonry. The rays emanating from the eye contain names of prominent anti-Masonic politicians of the 1830s, including John Quincy Adams, Edward Everett, and William Wirt.