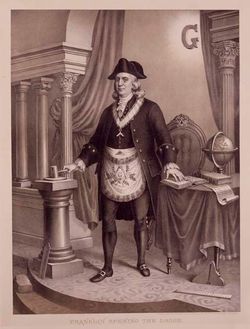 While George Washington (1732-1799) is arguably the best-known American Freemason, Benjamin Franklin (1706-1790) may be a close second.  The National Heritage Museum collection includes a number of objects depicting Franklin, which recognize his Masonic membership.

This print, Franklin Opening the Lodge, was published by Kurz and Allison of Chicago and dates to 1896.  The partnership, which extended from 1880 to at least 1899, produced a wide range of decorative prints, including a series depicting Revolutionary War battles.

Benjamin Franklin became a Freemason when he was initiated in St. John’s Lodge in Philadelphia in 1731.  His involvement with the fraternity extended over the next fifty years, during which time he held several leadership roles.  He served as Grand Master of Pennsylvania in 1734 and Provincial Grand Master of Pennsylvania in 1749.  While in Paris during the American Revolution, Franklin became a member of the Lodge of Nine Sisters (La Loge des Neuf Soeurs), serving as its Venerable Master from 1779 to 1781.  (For more on Franklin's Masonic activities, see this previous post on our blog.)

In this print, Franklin wears a Masonic apron and a Master’s jewel around his neck.  He stands in a lodge room, surrounded by a number of Masonic symbols.  Presumably, this print appealed to Freemasons around the country and was considered appropriate as decoration in the lodge and in the home.

This print is pictured in the Treasures section of our website, which includes information on approximately 100 objects from our collection.