Conservation of Masonic Treasures: Saving the Mark Book
Have Questions About The Lost Symbol And Freemasonry? Ask Us!

A Masonic Past Master's Jewel 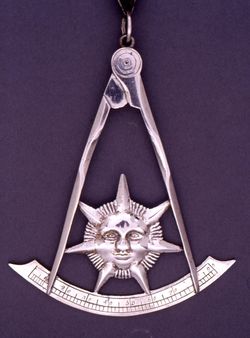 As Freemasonry developed during the early 1700s in England and America, symbols were associated with each office.  The officers started wearing their symbols as silver pendants, called jewels, while attending meetings and public ceremonies.  Masonic jewels were almost always silver, generally made by a silversmith working in the area where the lodge met, although few are marked by their makers.  The lodge’s officer jewels belonged to the Lodge and passed from man to man as they entered and left office.

The jewel seen here is a Masonic Past Master’s jewel.  Unlike lodge officer jewels, Past Master jewels were usually purchased by the lodge and then presented to the outgoing Master in appreciation of his service as leader.  The recipient would wear his Past Master jewel on his chest at lodge events to signify his experience.  This jewel was presented to James Dickson (1774-1853), Past Master of Boston’s St. John’s Lodge, in 1812.  Dickson was born in London and came to Boston by 1796, where he followed an acting career and managed the Boston Theatre during the early 1800s.  He later became a merchant, importing fancy English goods, and accumulated a fortune estimated at $100,000 by 1851.

Dickson became a member of St. John’s Lodge in 1804, serving in several offices between 1808 and 1815.  After receiving this jewel in recognition of his service as Master in 1812, Dickson again served the lodge as Master in 1818 and in 1829.  He also served as Grand Warden of the Grand Lodge of Masons in Massachusetts; this jewel is now part of the Grand Lodge collection at the National Heritage Museum.

Past Master’s Jewel, 1812, Boston, Massachusetts.  Collection of the Grand Lodge of Masons in Massachusetts at the National Heritage Museum, GL2004.0145.  Photograph by David Bohl.