Boston Turns on the Lights for the Knights Templar in 1895 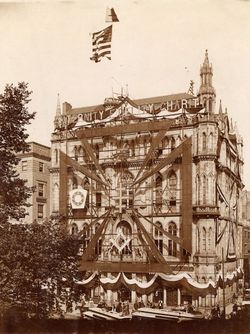 At the end of August 1895, the city of Boston greeted 20,000 Masonic Knights Templar from around the country.  These men, and their wives, gathered in the city for their Triennial Conclave (see our previous post on this event).

While the parade on August 27 must have been quite a sight, it was not only the Knights Templar members that dressed for the event.  As part of the celebration, the Grand Commandery of Massachusetts and Rhode Island decorated the exterior of the Boston Masonic building with a spectacular display of bunting and electric lights.

This photograph shows just how conspicuous the building was, with the large central Templar cross, Masonic keystone and square and compasses symbols.  Across the top of the building, the words “fraternity,” “fidelity,” and “charity” are spelled out in lights.  At night, when the lights were turned on, the building glowed for all to see.

Sadly, less than two weeks after the Conclave celebrations concluded, the Boston Masonic building caught fire and had to be torn down.  This was the second devastating fire on this site in thirty years.  In 1864, the previous building at the corner of Tremont and Boylston Streets, which housed the Winthrop House Hotel as well as the Grand Lodge of Massachusetts, caught fire.  Both times, no one was trapped in the building, but the Grand Lodge did lose treasured objects, regalia and papers.

The Grand Lodge rebuilt their Masonic building at the same location – now 186 Tremont Street – and dedicated the new building in December 1899.  Today, that building is home to the Grand Lodge administrative offices, the Samuel Crocker Lawrence Library, five lodge rooms and a theater. Twenty Masonic groups regularly meet in the building.

Thanks for the comment! We are fortunate to have several photos from the 1895 Conclave - and from many other events - that show the men in their regalia. As you suggest, these events and processions allowed Masons to identify themselves as members and to attract the interest of the crowd - undoubtedly leading to new members.

I have frequently posted this photo anytime some indignant Mason has criticized publicity generated by a grand lodge. Think Masons never "advertised" until the advent of the 20th century billboard or the Internet? Think again. And what do you suppose all of those processions through town in their regalia was all about in the 18th century?