The Hobo Adventures of Ralph Evans, 1933
New Show Opens August 15! “For All Time: Clocks and Watches from the National Heritage Museum”

A Masonic Print: The Iron Worker and King Solomon 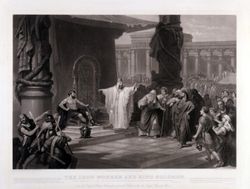 Masonic prints can often be confusing to the uninitiated.  Sometimes, it can even be hard to tell whether a print is Masonic or not.  Upon first glance, the print pictured here (from the National Heritage Museum collection) may not appear to relate to Freemasonry, but if you dig deeper, it does have a connection.  Titled The Iron Worker and King Solomon, it depicts the celebration of the completion of King Solomon’s Temple, a Biblical structure that figures prominently in Masonic ritual and symbolism.

As illustrated by the print (and explained in printed text below the image), Jewish legend tells that King Solomon invited all of the people who worked on the Temple to the celebration, but when the throne was unveiled, a blacksmith was sitting in the place of honor.  Threatened by the crowd, the smith said, “Thou hast, O King, invited all craftsmen but me.  Yet how could these builders raise the Temple without the tools I fashioned.”  “True,” agreed Solomon, “The seat is his right.  All honor to the Iron Worker.”  In addition to connecting with Masonic symbolism, the print reflects its Gilded Age date of publication, when steel was a pre-eminent American industry.

Bradley and Bro. of Philadelphia published this steel engraving in 1889.  The artist, John Sartain (1808-1897), emigrated to Philadelphia from London in 1830.  Sartain enjoyed a prolific career as an engraver.  He also published magazines.  In 1876, he headed the art department for the Centennial Exposition, which was held in Philadelphia.

Hello Tom: Thanks for reading our blog and commenting. It's great that you know where your copy of this print came from. Take a look here on our blog at our post on appraisals for some suggestions. You could also check with an auctioneer in your area who would be able to give you a sense of the current market value. Aimee Newell, Director of Collections.

My mom has one of these. It was handed down to her from her grandfather. When they were tearing down a local Masonic lodge they were going to throw it away and he asked if he could have it and they gave it to him. He comes from a long line of masons.
Does anyone have any advice on how to find the value of this piece? Thanks for the info.

Hi David: Thanks for reading our blog and telling us about your copy! Aimee E. Newell, Director of Collections

I own a copy of this print. It is in relatively good condition with an impressive antique frame. The newspaper used to reinforce the print in the frame is from Philadelphia dated: July 23rd 1897.

Hello Donald: Thanks for commenting on our blog. I am always interested in stories of how objects "travel" and pass from owner to owner. It seems somewhat unusual that your print was framed with a second one behind. Thanks again for sharing this story with us.
Aimee Newell

I recently purchased a copy from an estate auction located in Penn. It was inclosed in a piece of panel with plexy glass covering and signed on the lower portion. When I separated the documents, I found a second one folded under the original not signed and torn in one area.