Tippecanoe and Log Cabins, Too!
The Question We Cannot Answer - How Much Is This Worth?

[Note: This is the first of a three-part post. The story will continue next Tuesday.] 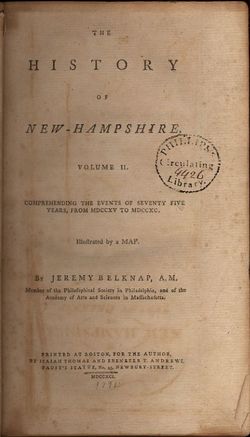 A close look at our copy of the first two volumes of Jeremy Belknap's three-volume The History of New-Hampshire reveals former ownership marks that, with a bit of research, uncovers an interesting story about who owned these books before they eventually came in to our collection. The book is marked with both an ink property stamp as well as a paper label. Today, and next week we'll focus on the story behind the ink stamp. Two weeks from now we'll look at the paper label.

Because circulating libraries were for-profit businesses, they left many traces of their existence through advertisements. Using America's Historical Newspapers, a subcription-based searchable database of early American newspapers, I was able to trace some of the history of Phillips Circulating Library over approximately 20 years.

Next Tuesday: A brief history of Phillips Circulating Library