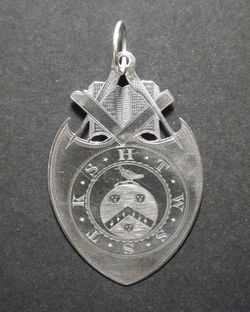 In previous posts, we’ve shared the King Hiram Royal Arch Chapter mark book, one of the treasures of our archives collection, and our discovery of its artist.  The excitement around this book continues as the National Heritage Museum announces the recent acquisition of a silver Masonic mark medal originally owned by one of the members of King Hiram Chapter!

Mark medals were often made to order for men who received the Mark Master degree, part of the York Rite, a Masonic organization through which a Freemason may pursue additional degrees.  The degree is named after the marks that stonemasons chiseled into the stones of buildings to identify their work.  Like medieval stonemasons, Masonic Mark Masters create their own symbol, which they register in their chapter’s Mark Book. 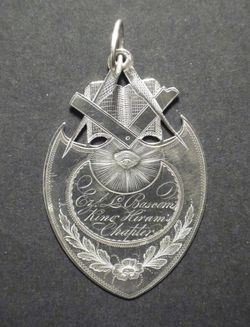 Originally owned by Ezekiel Bascom (1777-1841), this medal was made in Massachusetts around 1816.  Ezekiel Lysander Bascom was born in Deerfield, Massachusetts in 1777 and pursued a vocation as a Congregationalist minister.  In 1806, he married Ruth Henshaw (1772-1848), who is known today for her prolific work as a rural artist.  Ruth Henshaw Bascom drew profile portraits in pencil, pastel and watercolor (follow this link to see an example of her work).  Ezekiel joined Boston’s St. Andrew’s Royal Arch Chapter in 1806.  Ten years later, in 1816, when King Hiram Chapter was formed in Greenwich, Massachusetts (much closer to his home than Boston), Bascom became its initial High Priest, or leader.  The design on the mark medal closely resembles the depiction of Bascom’s mark in the Chapter’s mark book (as you can see in the photo below). 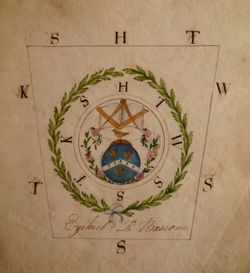 The medal was purchased with the assistance of the Kane Lodge Foundation and the Cogswell Beneficial Trust.  The National Heritage Museum deeply appreciates their support.