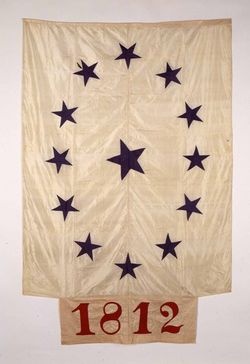 In 1813, from her home on the Fore River in Weymouth Landing, Massachusetts, eight-year-old Harriet “Hattie” White presented this flag to a company of Weymouth Exempts.  Recently, after being passed down through five generations of the family, Francis and Christie Wyman donated it to the National Heritage Museum.

According to family tradition, the flag was made by a group of women in Weymouth.  Harriet’s relatives may have been part of this group.  Perhaps young Harriet herself assisted by sewing the straight seam down the center or by making some of the neat hemming stitches along the edges.  Twelve blue silk stars are appliquéd to each side of the flag in a central oval shape.  A larger star is stitched in the middle.  On one end, a piece of glazed cotton with appliquéd red wool numbers, “1812,” is attached.  This piece seems to have been added later, well after the flag was initially made.  It helps to tell the flag's story, preserving its history of manufacture during the War of 1812 and reminding us of the value that subsequent family generations placed on it.

In 1829, when she was 24 years old, Harriet White married Benjamin Clark Harris (1799-1842) of Boston.  Harriet continued to talk about the flag at family gatherings until her death in 1887.  In 1916, a family member wrote down the details; these notes remained in a box with the flag when it was donated to the National Heritage Museum, allowing us to continue telling its story to future generations of Americans.