An Undeclared War and the Ship, the "Industry" 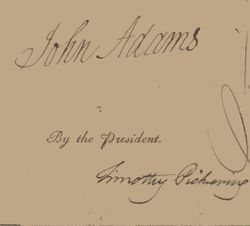 In preparing the new vault after its recent renovation, the Librarian and Archivist were going through some flat files that contained uncataloged backlog material. Most of what was there were unidentified photographs and facsimile documents. To our surprise, though, we found a rare and interesting document which sheds light on the story of the so-called XYZ Affair, and the United States undeclared war with France during 1798-1800. The document we came across is an original document signed by John Adams!

The original manuscript and printed certificate for the ship, the "Industry," with Isaac Cutter as Commander, permitted the ship to travel from Boston to Aux Cayes, a French colony on Hispaniola (now Les Cayes, Haiti.)  The certificate is dated 1797.The document certifies that this is a ship of the United States of America and asks those who encounter the ship to let it navigate waters and enter ports during its travels. The "Industry" was laden with many goods:  butter, beef, fish oil, tea, and other merchandise. The document is signed by then-president of the United States John Adams and spells out its terms in four languages:  French, Spanish, English, and Dutch.

The relationship between France and United States became strained in the late 18th century for several reasons.  France was at war with Great Britain and the United States was trying to remain neutral.  The United States ran into difficulties due to the harassment of its merchant vessels by both the English and the French.  When Jay's Treaty was signed on November 19, 1794, it was an attempt to improve the relationship between England and the United States.  However, the French saw this treaty as a violation of earlier agreements signed with their government, as well as a violation of American neutrality.  Because of this, the French government passed several decrees permitting their ships off the coast of North America and the West Indies to capture American merchant vessels, like the "Industry."

The French inflicted substantial losses on American shipping. Secretary of State, Timothy Pickering, reported to Congress on June 21, 1797 that the French had captured 316 American merchant ships in the previous eleven months. In his State of the Union address to Congress at the close of 1797, President John Adams reported on France’s refusal to negotiate and spoke of the need "to place our country in a suitable posture of defense." 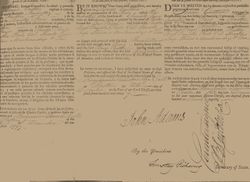 United States diplomats tried to convince the French to revoke the decrees but failed. Both the United States and France were frustrated, but neither formally declared war.  However, the United States formed a small navy and allowed merchant vessels to carry arms to defend themselves.  It revoked former treaties with France.  The relationship bewteen France and the United States continued to be hostile until the signing of the Convention of Mortefontaine on September 30, 1800.

Certificate for the Brig the "Industry", 1797, Boston, Massachusetts
Gift of William Caleb Loring, Van Gorden-Williams Library and Archives, A91/041/1