Calling All Masonic and Fraternal Scholars! 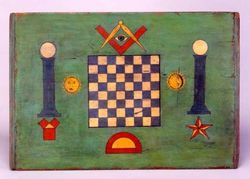 The National Heritage Museum announces its first symposium, to be held at the Museum on Friday, April 9, 2010 - New Perspectives on American Freemasonry and Fraternalism.

We are now seeking proposals for papers to be presented at the symposium.  As one of the largest repositories of American Masonic and fraternal objects, books and manuscripts in the United States, the Museum aims to foster new research on American fraternalism and to encourage the use of its scholarly resources.

The symposium seeks to present the newest research on American Masonic and fraternal groups from the past through the present day.  By 1900, over 250 American fraternal groups existed, numbering six million members.  The study of their activities and influence in the United States, past and present, offers the potential for new interpretations of American society and culture.  Diverse perspectives on this topic are sought; perspectives on and interpretations of all time periods are welcome.

Proposals should be for 30 minute research papers; the day’s schedule will allow for audience questions and feedback.

To submit a proposal: Send an abstract of 400 words or less with a resume or c.v. that is no more than two pages.  Be sure to include full contact information (name, address, email, phone, affiliation).