From Insurance Executive to Masonic Apron Designer?
Behind the Scenes With Museum Staff and Friends

425 Horses and Thousands of Knights Templar 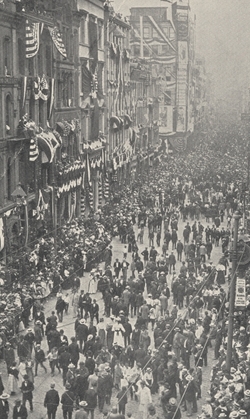 In an exhibition on view here at the National Heritage Museum, The Grand Lodge of Masons in Massachusetts: Celebrating 275 Years of Brotherhood, there's a section devoted to the 26th Triennial Conclave of the Grand Encampment of Knights Templar of the United States that was held in Boston from August 27-30, 1895, featuring many objects related to (or created expressly for) this meeting of Knights Templar.

You might be thinking, "What's the big deal? Did anyone in Boston even notice this Conclave?" In fact, it was a huge event. Just read the NY Times account of the parade held on August 27, 1895 where they report that "Boston has seldom, if ever, been so elaborately decorated. Practically every building along the line of the march, besides many of the side streets, is clothed in color, with appropriate mottoes and Masonic emblems, intertwined with streamers and bunting."

Interested in learning a bit more about this event, I checked to see what we have in the library's collection. Not surprisingly, we have a few different publications that were published expressly for (and about) the 1895 Triennial Conclave. The Report of the Triennial Committee is perhaps one of the richest. It's the official report of all of the various activities that took place over those three days.

Here are just a couple of interesting excerpts, which, I think, give a flavor of the events:

Committee on Horses and Horse Equipments: "By careful canvassing and advertising the Committee were able to provide 425 horses suitable for the purposes of parade..."

Committee on Receptions: "One of the earliest arrivals was that of the California Commandery, which was enthusiastically hailed by the large throng which awaited its coming at the Union Station. They were cordially welcomed by the Committee, and the ladies conducted to carriages. The Commandery having mounted their horses were escorted to their headquarters by Boston Commandery, 360 strong, receiving a continual ovation along the line of the route."

Committee on Music: "The majority of the visiting commanderies, however, brought their best local bands with them...One hundred thirty-seven bands, besides numerous drum corps, were distributed throughout the line [of the parade]."

But perhaps photographs of the event, two of which can be seen here, give the best sense of what it was like to be there. The top photo above shows a crowd of parade-watchers on Washington St., waiting for the parade to pass by; the bottom photo shows the staff of the Chief Marshall as the parade passes through Copley Square. The photos seen here are from:

But if you really want to see photos, we've got a 500-page book (both too big and too fragile to scan), that goes a long way in documenting the events:

Additionally, we have a number of postcards related to the 1895 Boston Conclave in our Duncan collection of postcards (MM 025) in the Archives.

Hello Joe: We have one of those same prints in our collection and we have the artist's name as "Elliot P. Badwell," but have never done any research into his work or career. Unfortunately, we can't comment on value - see Jeff's comment below about our previous post on appraisals, "The Question We Cannot Answer - How Much Is It Worth?" That post gives some information about finding an appraiser.

I have 2 3 foot by 2 foot colored prints of the Masonic Temple in Boston Electric Illumination during the Conclave. I cant figure out the artists name it may be Bodwell but Im not sure. Just wondering if you knew who the artist might be and if they are any significant value.

Thanks for the comment. Please check out our previous post, called The Question We Cannot Answer - How Much Is It Worth? (http://nationalheritagemuseum.typepad.com/library_and_archives/2009/07/the-question-we-cannot-answer.html)

We have a 500 page book, entitled "Photo Souvenir, 26th Triennial Conclave, Boston, 1895" The binding is coming apart, but the pages are in excellent condition. Also, with the book, there is some sheet music entitled "Boston Commandery March", as played at the Triennial Conclaves of Knights Templars at Denver, 1892, and Boston, 1895. - By Thomas M. Carter. The sheet music is enclosed in plastic, and consists of three sheets printe don both sides. I would like to find out what the value of it is and find a buyer.