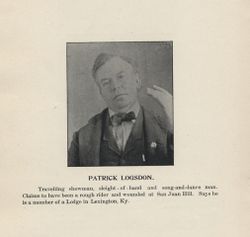 Our blog turns one year old this week, and we thought we'd harken back to our first post and return to the subject of Masonic impostors, by featuring another image from the Album of Masonic Impostors, published by the General Masonic Relief Association of the United States and Canada in 1903.

But first a little background about the organization that published the Album. In 1885, a number of Masonic organizations in North America met in Baltimore to organize the General Masonic Relief Association of the United States and Canada, in order “to establish a central organization for the purpose of facilitating the discovery and exposure of persons traveling about the country and imposing upon the charities of Masons.”

One of the main ways that they accomplished this was by publishing a warning circular that was distributed to relief boards in major cities throughout the U.S. and Canada. From there, the relief boards would pass on the information within their local jurisdiction. The goal of all this? To try to spread information about known frauds and impostors who were looking to bilk Masonic relief boards out of money. The Masonic Relief Association compiled physical descriptions, and sometimes photos, of known impostors into their circulars and sent the circulars to relief boards - hopefully in advance of the arrival of the Masonic impostors described within.

Shown above is Patrick Logsdon, from the Album of Masonic Impostors. He is described as follows:

Traveling showman, sleight-of-hand and song-and-dance man. Claims to have been a rough rider and wounded at San Juan Hill. Says he is a member of a Lodge in Lexington, Ky. 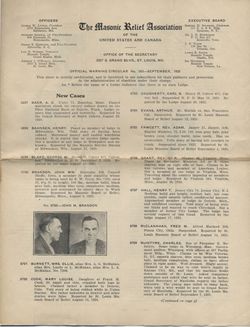 The Album contains impostors who all originally appeared in one of the warning circulars. But what exactly was this circular and what purpose did it serve?

The Official Warning Circular (No. 503, September 1928 is shown here) was distributed by the Masonic Relief Association to the various masonic relief boards throughout the country. The hope was that by centralizing communication, word could spread faster than a Masonic impostor could travel. For example, if the relief board in Chicago discovered someone trying to defraud them, they could send a telegraph or place a telephone call to the Masonic Relief Association. The Association would include this information in the compilation of their four-page monthly circular - publishing names, descriptions, and sometimes photographs of known Masonic impostors who had been caught attempting to defraud local relief boards. The circular was mailed out to all the relief boards that belonged to the Association. By the time the Masonic impostor in Chicago made his way to Boston, the Boston relief board would already have seen his mug shot in the warning circular. (An aside: if you're interested in communication networks and how news travels, check out our post on the spread of the Lexington Alarm from last month.)

In addition to publishing newly reported impostors, the Official Warning Circular also republished old cases, reported missing persons, and gave a list of "Lost Receipts" - i.e. Masons who had lost their membership cards - cards which subsequently might have fallen into the hands of a current, or future, Masonic impostor, who might assume the name and identity from the membership card.

Halleran, Michael. "Be on the Qui Vive—Cowans, Swindlers, and Con Men, Then and Now." Scottish Rite Journal, May/June 2009. Washington, DC: Supreme Council, 33°, Ancient and Accepted Scottish Rite of Freemasonry of the Southern Jurisdiction, 2009.

In addition, the Van Gorden-Williams Library and Archives also has a number of issues of the Official Warning Circular, as well as some of the proceedings of the annual meeting of the Masonic Relief Association.