Does the Order of Eastern Star exist in Lexington today? 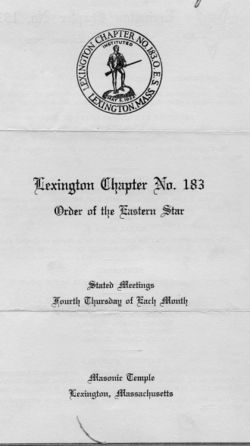 The Library & Archives recently acquired a collection of material from the Lexington Chapter, No. 183, Order of Eastern Star (MA 051) donated by John M. Murray, Jr. The donor's parents, Florence M. Murray and John M. Murray, Sr., were active in the organization in the 1940s and the 1950s at the local and state level.

Much of this new acquisition consists of meeting notices of Lexington Chapter No. 183 and quite a bit of material about the Grand Chapter of Massachusetts, Order of Eastern Star (OES).  The meeting notices span the time period 1938 through 1975.   On the left you can view an example of one these notices from  January 1950.  From 1949-1950, Florence M. Murray was Worthy Matron (or president) of the chapter and her husband John M. Murray, Sr. was Worthy Patron. 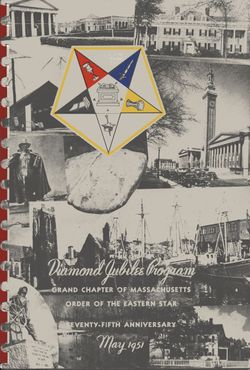 Lexington Chapter No. 183 was constituted (chartered) in 1922.   Following the close of World War I, there was an increased interest in fraternal organizations.  In 1922, there were 12 new chapters instituted and 10 new chapters constituted in Massachusetts. This was the largest number of new chapters organized in one year in the Grand Chapter's history.

The Lexington Chapter was active for 82 years – until 2004 – when it merged with Mount Carmel Chapter No. 230, in North Reading.

Among the meeting notices, programs, and calendars in the gift we received were a group of photographs.  One photograph in particular stands out in the collection, and can be seen here.  What ceremony are they performing?  What significance does it have? I was curious to know. 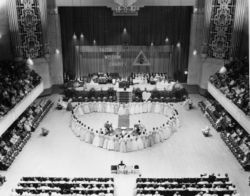 From further inquiry, I discovered that this is not a photo of a Lexington Chapter ceremony, but instead a ceremony that took place at a Grand Chapter of Massachusetts meeting of Order of Eastern Star.  It was a public ceremony, not a private ritual ceremony.

According to Dianna M. Gillard, of the Grand Chapter of Massachusetts, the photo shows Eastern Star women standing in the formation of a heart – the emblem of the year of this ceremony – with the OES symbol inside.   The watchwords that year were “Loving Kindness...Thoughtful Understanding.”  The public ceremony shown in the photo is a Confirmation of the Deputies for the Flor-del-es year 1958-1959, held in Worcester Memorial Auditorium. Florence Waldron was Worthy Grand Matron and Ernest Pearson was Worthy Grand Patron.

Posted at 09:00 AM in Freemasonry, Freemasonry and Women, Order of Eastern Star, Posts by Catherine Swanson | Permalink | Comments (0)