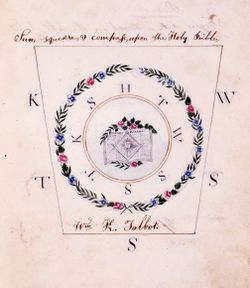 One of the staff’s favorite objects in the Van Gorden-Williams Library & Archives collection at the National Heritage Museum is the mark book for King Hiram Royal Arch Chapter (see Archivist Catherine Swanson’s previous post about the book).  For several years, we theorized that the artist of the book, an “M.S. Harding” who signed several pages, might be a young woman.  The technique exemplified in the drawings and the use of watercolors to create them suggest the kind of work taught in numerous New England academies for young ladies during the early 1800s (see an image of one page on the left).

New research has led to the exciting discovery that “M.S. Harding” was indeed a young woman, Martha S. Harding of New Salem, Massachusetts.  Born in 1813, Martha was the daughter of Alpheus Harding (1780-1869) and Sarah Bridge (b. circa 1788).  Her father belonged to King Hiram Royal Arch Chapter, which was established in nearby Greenwich, Massachusetts in 1815.  Massachusetts history buffs will recognize Greenwich as one of the towns submerged in the 1930s to create the Quabbin Reservoir.  Alpheus Harding, the pastor of New Salem Congregational Church, chose a mark that reflects his vocation.  It shows a lamb holding a Christian cross.  Two other pages from the book are shown here; the one on the right depicts the mark chosen by Thomas Thwing and shows Martha’s signature at the bottom. 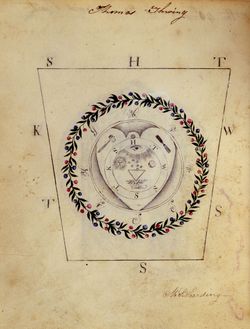 Alpheus also served as a preceptor at New Salem Academy.  School records show that his children - including Martha, who was a pupil from 1822 to 1829 - attended.  It is possible that she learned to draw and paint while at the Academy, perhaps even making the mark book while she was a student.  When she was 25, in 1838, Martha married Asarelah M. Bridge (1810-1865), who was a student at New Salem Academy in 1830.  Sadly, Martha contracted consumption soon after her marriage and died in 1841 at the young age of 27.  But her drawings live on in the King Hiram Chapter mark book, allowing us to admire her artistic skill and teaching us that the families of 19th-century Freemasons were familiar with the symbols and values of the fraternity.