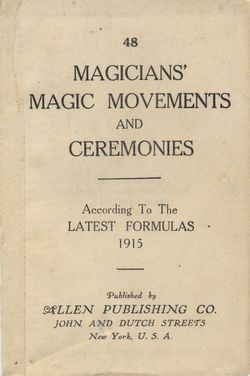 A book that shows up on our recent acquisitions list, entitled Masonic Mnemonics: Memory Aids for Masonic Rituals, got me thinking about the central role that both memory and aids-to-memory play in Freemasonry. A physical manifestation of this is the ritual, or cipher, book.

When a man (or in some cases, as we've written elsewhere, a woman) joins a local Masonic lodge, he goes through three ritual ceremonies, known as "degrees." Often referred to as the Symbolic Degrees - Entered Apprentice, Fellowcraft, and Master Mason - these three degrees are thematically joined by the story of the construction of Solomon's Temple. A person going through each of these degrees is known as a candidate, and one thing that the candidate must demonstrate before being allowed to progress to the following degree is that he is "proficient" in the preceding degree. Proficiency, in short, is evidence that he has memorized the candidate's portion of the ritual and, with any luck, understands what he is saying, rather than simply reciting the lines. This proficiency is demonstrated before the members of the lodge he is joining, in the ritual degree ceremonies which involve the participation of the candidate and the officers of the lodge.

Although Masonic ritual is often taught "mouth to ear" through an oral tradition of having an older Mason instructing a new candidate in preparation for his ritual degree ceremony, this learning is often augmented by the use of a ritual or cipher book. We've written about rituals before, but all of the ones we've addressed so far have been printed in plain, easy-to-read English. In American Freemasonry, however, there is a long tradition of Masonic ritual books being published in cipher. 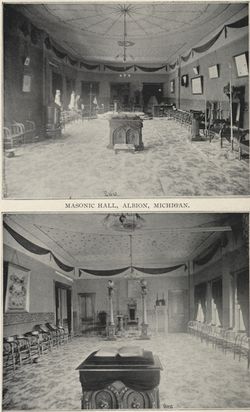 If you're not a Mason, all this talk of rituals, degrees, and ciphers might be a little confusing. An analogy might help: one might think of Masonic degree ritual as a sort of moral play, in which the candidate is the main protagonist. The ceremony usually takes place in the center of a lodge room (two old views of a lodge room in Albion, Michigan are illustrated here), a large, rectangular room with seating around the perimeter, and traditionally located on the second floor of a Masonic temple. The lodge room is a symbolic representation of King Solomon's temple, and the ritual uses aspects of the story of the building of Solomon's temple as the basis for the story it tells.  The cipher is the script of the play, which the candidate and other participants of the lodge use beforehand to memorize their lines. The books are not used during the actual ritual ceremony, in the same way that in a staged play actors do not read from their scripts.

Ok, but why publish the rituals in cipher (an example of which can be seen here) in the first place? Part of the answer has to do with a candidate's vow not to "write, print, paint, stamp, stain, cut, carve, hew, mark, or engrave" the secrets of Freemasonry and therefore make them easily available to non-Masons. Putting aside the fact that non-cipher Masonic ritual exposures have been around since the 18th century - and that many of the consumers of these exposures were likely Freemasons themselves who were happy to have a written script to help them memorize ritual - a tradition of personal honor linked to not revealing that which you've vowed to keep secret, led, in part, to the use of ciphers. Ciphers are essentially gibberish to those who have not memorized the ritual to begin with, but to those who know (or who have mostly memorized) the ritual, the cues contained in the cipher are an "aid to memory," short-hand prompts that help one remember the words. They contain cues to a script that one has already learned, without printing the full text of the ritual itself. Indeed, the late 19th and early 20th century produced a slew of cipher books, many carrying "A Valuable Aid to the Memory" as part of their subtitle.

In addition to being written in cipher, many ritual books published in the late 19th and early 20th centuries also had titles that, arguably, are designed to make non-Masons unaware that the book contained Masonic ritual. Two of the most popular titles from that time period have titles that might easily confuse a non-Mason who stumbles across them: Ecce Orienti: An Epitome of the History of the Ancient Essenes, Their Rites and Ceremonies; and King Solomon and His Followers: A Valuable Aid to the Memory, Strictly in Accordance with the Latest Authors. In addition to perhaps adding to the perceived mysteriousness and secretiveness of Masonic ritual, these books also served the purpose of not revealing any secrets that a Mason promised to keep, on the off chance that a cipher was casually left around the house or accidentally lost. (The use of these books were sometimes silently condoned, but in other cases - as with the Grand Lodge of Massachusetts in 1885 - their use was condemned in "very impressive and forcible language.") That all said, to the uninitiated, a cipher is not going to quickly reveal its contents.

A gem from our collection, that also reveals some of the humor used in creating some of these misleading titles, is a ritual cipher entitled Magicians' Magic Movements and Ceremonies, published in 1915 by Allen Publishing in New York (and shown in both illustrations above). The book is, in actuality, a cipher for the ritual of the Symbolic Degrees as practiced by the Grand Lodge of Michigan. (And here we need to give a big tip of the magician's hat to John M. Karnes, a ritual collector who helped us geographically identify this ritual cipher, something that had us stumped.)

In the past, as well as today, rules and regulations regarding ritual and cipher books vary from state to state. Each state's Grand Lodge has its own rules and regulations for all of the lodges that it oversees in that state. Paul Bessel has an interesting map and chart that illustrates each U.S. Grand Lodge's views regarding the use of printed rituals and/or ciphers in that state's local lodges.

And, finally, if you start searching around the web for Masonic ciphers, you will quickly encounter the "pigpen" cipher, which is also sometimes called the Freemason's cipher. This, indeed, is a cipher code that was once used in Freemasonry, although it is completely different from the type of cipher we're writing about in this post. More on this other cipher perhaps, in a later post.

Posted at 09:00 AM in Ciphers, Freemasonry, Posts by Jeff Croteau, Rituals | Permalink | Comments (13)

The short answer is, not really. The cipher is purposefully ciphered so that those who don't already know the text cannot easily read it. As the article mentions, it's intended as a memory aid, to help prompt someone to remember the text of the ritual that they already learned. In other words, there is no "key" to the cipher that helps decipher it. Thanks for reading our blog!

Is there a way I can learn to read my copy of Magicians' Magic Movements and Ceremonies 1915? I found a copy while working on genealogy and I found the book in some of my family history records.

Thanks for reading our blog and thanks for the additional info!

MMM&C #35 also has the title of College Monitor, and King Solomon and his Followers (Colorado). All published by Allen. There are also red cover editions #37 of MMM&C which is actually free download ebook and the Royal Arch cipher by Allen publishing.

Thanks for writing. I’m afraid that we can’t answer questions about value. Please see our blog post on the topic:

Greetings: I too have a 1915 edition leatherbound book in MINT condition and wondering if it has a substancial value.

Great to hear that you have a copy of this book. In terms of value, we cannot appraise items. Check out our post on why that is: http://nationalheritagemuseum.typepad.com/library_and_archives/2009/07/the-question-we-cannot-answer.html

I have Magicians' Magic Movements and Ceremonies 4-35 dated 1915.
can this book be worth money,if so approx how much. THANKS!!

I'm glad you enjoyed the post. If you're ever looking for a home for your Consistory photo, be sure to keep us in mind!

I just donated a copy of the 1927 version, leather bound, unmarked, no clasp to our local Masonic Chapter. It belonged to my grandfather who was in the same 32 degree Consistory as Henry Ford the first. I have a picture of the Masonic class. I found your post very interesting.

I have also all four volumes of HG Wells Outline of History--Good condition, Hard copy and thick vellum type paper. Bought it at a library garage sale in the '50s. 4th edition. Love the feel of books even though I've published on the potential of the electronic medical record and taught using powerpoint and the new information tools. Enjoyed your information.

Thanks for your comment. The question of "rarity" in terms of books can be complicated. I would encourage you to check out this page of the American Library Association's Rare Books and Manuscripts Section (RBMS), in which they answer some of the questions surrounding determining the rarity of books: http://www.rbms.info/yob.shtml#01

In our library, we have this book classed in our special collections, as a rare book.