Get Your Tickets Today for "Teddy Roosevelt: Mind, Body and Spirit," April 22 at 7:30 pm
"Quite to Connecticut": (Google)mapping the Journey of the Lexington Alarm

"For the Defense of the Lives, Liberties and Properties”: Celebrating Patriot’s Day

One of the joys of living in Massachusetts is the local holidays and history-based celebrations.  This is state that takes the Revolutionary era seriously.

On April 20, 2009, we will mark Patriot’s Day, a holiday originally established in 1894, to commemorate the history-making battles at Lexington and Concord.  The National Heritage Museum’s exhibition, “Sowing the Seeds of Liberty:  Lexington and the American Revolution,” tells the story of the day through the eyes and voices of the people who helped shape our nation's struggle for independence, not only on the day of the battle but in the years and decades before. 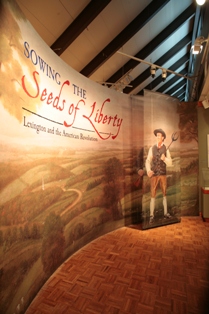 This year, through the generosity of the Lexington Historical Society, we have special short-term addition the exhibition—one of the drums thought to have been purchased by the town of Lexington in the uncertain months before April 1775.

In 1774, with the Boston harbor closed, General Gage appointed governor and a growing number of British troops in the city, many New Englanders feared an armed confrontation with the soldiers. Lexingtonians began to prepare.  Like other New England towns, in the mid-1750s, Lexington established a militia both to defend itself and to provide trained troops to fight in the French and Indian Wars. In the years after that conflict, the militia continued.

Faced with growing tensions and increased British military presence, in the spring of 1774, Lexington formed a committee to manage its stock of ammunition. This committee soon purchased 6 half-barrels of gunpowder, over 100 pounds of bullets and “a Pair of Drums for the use of the Military Company in Town.” The new Massachusetts Provincial Congress, which colonists established in response to the closing of the General Court in 1774, started seriously organizing the colony’s military resources in the fall. Colony leaders asked each town to send an accounting of militia members and a description of its equipment and ammunition stock.

By February, British General Gage knew that the colony was preparing for a fight. His intelligence agents told him that all together, Massachusetts towns could field 15,000 armed and well-trained men. In 1774 Lexington residents elected John Parker captain of the militia. He trained 141 men on the green in front of the meetinghouse throughout the warm fall and winter. William Diamond, a sixteen-year-old wheelwright’s apprentice, was the militia’s drummer. For months, the rhythms he beat on his drum communicated Captain Parker’s commands when the company practiced drilling. 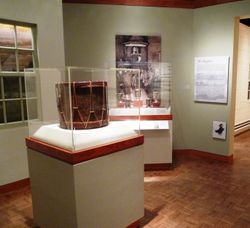 Neighboring towns began stockpiling their ammunition and supplies in a central location: Concord. A progressively more alarmed General Gage received reports that 10 tons of musket balls and 35 half-barrels of powder, along with a large stock of medical supplies and several cannons had been brought together in Concord. While Gage considered what to do about this flagrant and dangerous preparation for military action, Captain Parker received an order from the Provincial Congress in March. He was to assemble his militia whenever General Gage’s soldiers marched out of Boston.  In the early hours of April 19, 1775, his drum called the militia to assemble outside Buckman Tavern.

To learn more about April 19, 1775, come see “Sowing the Seeds of Liberty:  Lexington and the American Revolution.”  You can also catch a preview of the exhibition online.