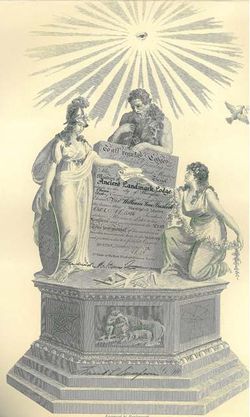 Thank you for reading our blog and your interest in my post! I would recommend that you contact the Librarian at the Grand Lodge of Massachusetts in Boston. Since the certificate that I featured in my post was issued by the GLMA, they might have more information.

I am compiling a history of The Royal Sussex Lodge No.501. This Lodge was founded in Hong Kong in 1844, moved briefly to Canton and then was in Shanghai from 1863 to 1952, after which it re-located to HK after the communist take over.

I would be very interested to see any photographs or document scans that anyone may have relating to Freemasons in Shanghai.

A "J.C.Carter" was master of The Royal Sussex Lodge in 1909 and 1913. I wonder if this could be the same "Robert Claude Carter" mentioned by Chris Webster. I would welcome more information on this.

A brief history of Masonry in China can be seen here: http://www.zetlandhall.com/history2.php

Hello, my great-grandfather Robert Claude Carter was a Freemason in Shanghai in the 1920s, although I do not know which lodge I do have some photographs from inside the lodge (he was a British Freemason) and I'd be happy to share them?

Hello Violet,
Thank you for reading and commenting on our blog.
I'm glad that you found the post on the Ancient Landmark Lodge of Shanghai interesting. It sounds as though you have papers from a lodge in Shanghai from the same time period--the 1920s. I will email you separately about your material as it is intriguing.
Best,
Catherine Swanson, Archivist

I have a small suitcase holding an assortment of Shanghai Masonic Lodge materials that my husband's father brought from China "Northern Lodge of China" from 1926. My husband has just passed away and I have not read the papers as yet. His father was British and there are materials, as well, from England.

Hello Jasbir S. Mann:
Thank you for reading our blog and posting a comment. Most of the Masonic lodges that I have found that are currently operating are in Taiwan, not mainland China. I have found no Masonic lodges in Shanghai that you could visit.
There is one lodge in Nanking, however it is temporarily in darkness. I wish my search had better results for you. Good luck on your trip to Shanghai!

Dear Bro, I would like to know if there is Lodge in Shanghai , I will be in Shanghai end of March
Please come back to me
Regards