You never know what you will find at the town dump! 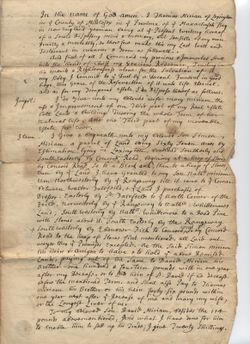 Pictured here are two early 18th-century documents that were found by Paul Murphy at a town dump in Maine about 15 or 20 years ago. Murphy was busy saving old newspapers and magazines during this period, when he came across these documents in a box that contained other materials, including a book about Lexington. Had Murphy not decided to take these items from the dump, there would have been no chance for their survival: this was at a time when his local dump didn't bury trash, but burned it.

Luckily for the Archives, Murphy recently came across the documents that he had saved and then set aside so many years ago. He donated these items to us in 2008, deciding that that they belonged at an institution where the public could have access to them.  This is a story that shows that you never know where you will find archival treasures!  Both items shed light on the well-known Meriam or Merriam family of Lexington. (Those familiar with the particulars of the Battle of Lexington & Concord, will surely have heard of Meriam's Corner.) 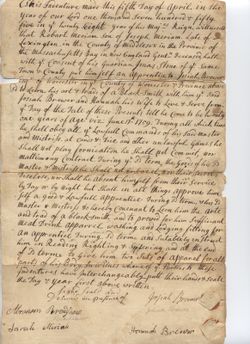 The second treasure is an indenture (1755) for Robert Meriam (1738-1782), son of Joseph Meriam (1696-1745), to be an apprentice to Josiah Brewer of Worcester, Massachusetts.  In exchange for Robert’s work as an apprentice blacksmith, he would receive food, clothing, and some education from Josiah and wife Hannah Brewer.  This indenture or legal contract would hold from 1755 until 1759 when Robert would turn 21 and probably go into business for himself.  You can see this indenture (USM 001.298) on the right.

More information and primary documents on early families in Lexington can be found at the Lexington Historical Society.

Source consulted for information about the Meriams:

Hudson, Charles.  History of the Town of Lexington.  Boston and New York:  Houghton Mifflin Company, vol. I and II, 1913.

Thank you for your comment and question. I have searched my sources here at the National Heritage Museum, and have found that, yes, in fact, Francis Jackson Merriam (of Harper's Ferry fame) was descended from the same founding Merriam families of Lexington. See the reference in Merriam genealogy in England and America by Charles Pierce Pope (1906) on Google Books. A fascinating connection!

I presume this is related to Francis Jackson Merriam, who was one of John Brown's Raiders that escaped -- ??