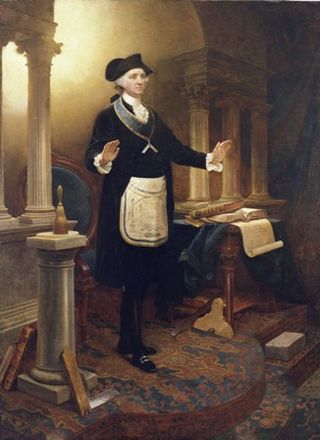 Painted by lauded German American artist Emanuel Leutze (1816-1868), George Washington as a Master Mason portrays America’s first president as if he is presiding over a lodge meeting.

The Scottish Rite Valley of Detroit purchased the painting in 1927 for display in their newly constructed and impressive Masonic Temple.  Exhibited in Detroit for decades, George Washington now watches over the National Heritage Museum’s auditorium.  A loan from the 32º Masons of the Valley of Detroit brought the painting to Lexington.

Interested in depicting inspirational moments in history, Leutze featured Washington in several compositions.  The best known of these continues to be George Washington Crossing the Delaware. Leutze first exhibited this now-iconic image to great acclaim in 1851.  Critics considered it a “great modern painting” in its day.

But why did Leutze choose to paint Washington surrounded by Masonic tools and wearing an apron thought to have been given to him by Marquis de Lafayette?  (For more on the apron once believed the handiwork of Madame Lafayette, visit the Masonic Museum and Library of Pennsylvania.)  As far as we know, Leutze himself was not a Freemason.  New Yorker John Riston paid the princely sum of $10,000 for the large (over ten feet high) painting.  The artist likely created the work to fulfill a specific request from Riston.  Further research may help us understand the reason behind  Riston’s commission.  In the meantime, we hope you will enjoy Leutze’s celebration of one of America’s best-loved heroes in his role as a Mason on your next visit to our auditorium.

It is wonderful that this important painting has come to rest, at least for the time being, at the National Heritage Museum!

The article I wrote with John Hamilton, entitled "Washington as the Master of his Lodge: History and Symbolism of a Masonic Icon," might be of use in making sense of this important painting. It was included the book George Washington American Symbol, edited by Barbara Mitnick and published by Hudson Hills in 1999.

Keep up the good work with this blog!