One of the recently announced American Library Association children's book award winners that particularly got my attention is Uri Shulevitz's How I Learned Geography.  The author-illustrator has included autobiographical details in previous books but never so poignantly.  His latest book tells of his Polish family, ravaged by war and forced to relocate.  Strangers in a new country, they are poor and hungry yet one night instead of food from the market his father brings home a large, colorful map and places it on their wall.  At first Uri and his mother are annoyed because there are so many other things they need.  In time he realizes the map nourishes him and his dreams as no food ever could.

It's a sentiment map-lovers of any age can appreciate.

And we are a museum of map-lovers.  Interesting, historic, beautiful and colorful maps both large and small may be found 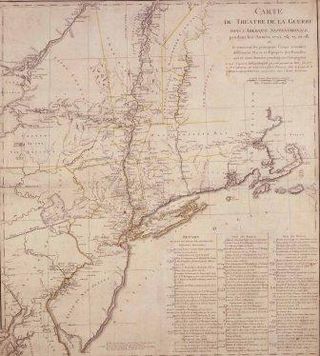 on many of our walls and often are exhibited or used in exhibits to illustrate the stories we tell.  Over thirty years ago when our Museum was new and the Library & Archives collection just being formed, maps were identified as a priority and a small but respectable collection acquired.  One of the early acquisitions, shown at right, Carte du Theatre de la Guerre dans L'Amerique...1775-1778 was drawn by Captaine de Chesnoy, an aide-de-camp to the Marquis de Lafayette and published in Paris. The three columns in the lower right list major campaigns of the Revolutionary War in chronological order so there's lots of visual and narrative interest all in one map.

Fortunately today it's easier than ever to find, study and even print or order reproductions of every imaginable kind of map.  New England has several wonderful map collections including the Norman B. Leventhal Map Center at Boston Public Library (BPL) and the Osher Map Collection at the University of Southern Maine (where the new map museum will open in September 2009).  Online resources about maps also are extensive.  It's hard to beat former British Library map librarian Tony Campbell's Map History site for an all around introduction to anything and everything having to do with maps.  The Library of Congress, University of Texas, New York Public Library and David Rumsay map sites also are comprehensive and, the Library of Congress along with the BPL site, provide the opportunity to buy reproductions from their collections.

And this post wouldn't be complete without mentioning Google and their many map products.  Several official and unofficial blogs are available to try to keep up with and make sense of their latest map offerings.

Sources listed and mentioned above:

Thanks for the feedback and for the suggestion on doing more posts on maps! - Jeff

This is fabulous! Yoiu have given me a great idea for my 3rd graders next year. I hope you will do more on maps!