100 Years and Radically Different...The Election of 1904
Now you see it, now you don't: fore-edge painting

When Barack Obama takes the presidential oath of office next week, he will participate in a ceremony that dates back to George Washington’s 1789 inauguration. His choice to swear his oath on an historical Bible—the one that Abraham Lincoln used in 1861—is much rarer. Only four presidents have used Bibles that former presidents used, and all four chose the same one: George Washington’s. 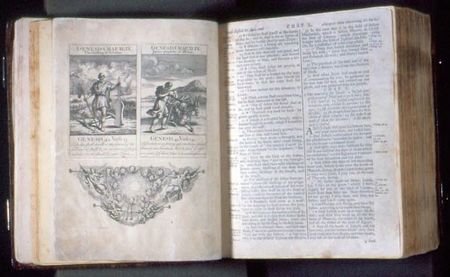 George Washington’s inauguration as the first U.S. president was held on April 30, 1789, in New York City. According to a 1908 account by New York’s St. John’s Lodge No. 1, although the ceremony was elaborately planned, at the last minute, organizers decided that the president should place his hand on a Bible when taking the oath of office. Jacob Morton, parade marshal and Master of St. John’s, quickly walked to his nearby lodge meeting room, and borrowed its 1767 King James Bible. Robert R. Livingston, State Chancellor and presiding Grand Master of Masons in New York, then administered Washington’s oath of office on it.

No one knows where the Bibles that the first fourteen presidents used came from, but we do know that in 1857, William Carroll, the clerk of the Supreme Court, procured a Bible for James Buchanan’s inauguration. Carroll and his successors provided the next half-dozen inaugural Bibles—including Abraham Lincoln’s. Then, on March 4, 1885, Grover Cleveland created a new tradition when he chose to swear his oath of office on a Bible his mother had given him when he was 15. Since then, most presidents have used family Bibles.

Freemason Warren G. Harding was the first president known to select the Washington Bible for his 1921 inauguration. Dwight D. Eisenhower followed in 1953, Jimmy Carter in 1977, and George Bush in 1989. George W. Bush intended to use it in 2001, but rainy weather changed the plan. He used a family Bible instead.

The George Washington Bible has been featured at a number of other important public and Masonic occasions, including Washington’s funeral procession in 1799; the dedication of the Masonic Temples in Boston and Philadelphia, in 1867 and 1869, respectively; the 1885 dedication of the Washington Monument, and its rededication 112 years later; a 1932 reenactment of Washington’s inauguration, commemorating the bicentennial of the first president’s birth; the inaugurations of some of New York’s governors; the installations of many of the Grand Masters of New York; and numerous exhibitions. Usually on display at New York’s Federal Hall, this Bible was on view at the National Heritage Museum for a 2005 exhibition on George Washington’s Masonic life and legacy.

The bible on view in Indianapolis will be there through February 22. It is not the Washington inaugural Bible, but, instead, the one on which he is said to have taken his oaths when initiated into Freemasonry. More on all of that at the Freemasons for Dummies blog: http://freemasonsfordummies.blogspot.com/2018/01/special-masonic-exhibits-come-to-indiana.html

And the museum has info about it on their own website: http://mlmindiana.org/museum/#Washington_Bible

And their hours can be found here: http://mlmindiana.org/contact/

Is the George Washington bible on display in Indianapolis now--January 26, 2018? If so for how long will it be on display , and what are the hours and days of the week? Thanks

We'd be happy to help you pursue this further. Could you tell us what kind of insight you're looking for?

I have a replica St. John's Lodge Washington mini Bible dated 1918. Inserted in the bible is a copy of a speech presented by R W Adolph Geering dated February 22, 1918. The speech has an orginal seal by St. John's Lodge. Could you please provide some insight?