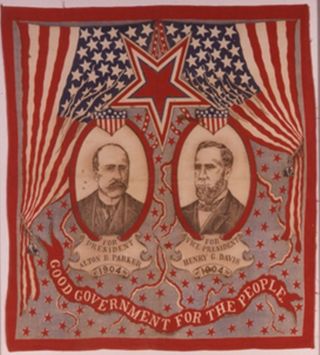 As we prepare to celebrate the historic inauguration of our first African American president in the wake of record voter turnout, a lively rivalry and media overload, it may soothe the soul to read about what is considered one of the dullest presidential contests in history – the election of 1904.

That year saw Republican Theodore Roosevelt (1858-1919) running against Democrat Alton B. Parker (1852-1926).  I’m sure you’re asking, “Who?,” right about now.   Parker and his running mate, Henry G. Davis (1823-1916), can be seen on the campaign textile at the left.  Leaving the colorful textile, now in the National Heritage Museum collection, aside, neither candidate did much campaigning that year.  It’s so hard to imagine such a thing that I’ll type it again – neither candidate did much campaigning.

Parker, who was born and raised in New York, worked as a lawyer and became active in that state’s Democratic politics in the 1870s.  In 1885, he was appointed to the New York Supreme Court, and then to the Court of Appeals in 1889, eventually becoming chief justice of the appeals court.  Parker’s pro-Labor views, along with his criticism of the 14th Amendment because of its power to restrict state action on civil rights, made him an attractive candidate for the Democratic party.

Roosevelt, on the other hand, was well-known, and remains so today.  Elected as Vice President under William McKinley (1843-1901) in 1900, Roosevelt moved into the top spot when an assassin killed McKinley in 1901.  In 1904, Roosevelt honored what was then an unwritten rule – no sitting president openly participated in a campaign.  Known as a hero of the Spanish-American War, Roosevelt also popularized the motto, “Speak softly and carry a big stick,” which came to characterize his foreign policy.  Despite his lack of campaigning, Roosevelt won big, carrying 33 states out of 45.  Roosevelt declined to run for reelection in 1908, but did run in 1912 as the Progressive party candidate.  The second textile shown here dates from that campaign and includes his name, the year and the name of the party, “National Progressive.” 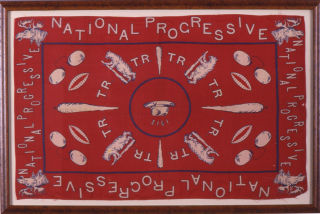 The textile also shows "big sticks" and bull moose, to remind voters of Roosevelt's past achievements.

The political textiles pictured here are part of a larger collection owned by the National Heritage Museum that was generously donated by Robert A. Frank.  This group numbers more than fifty items dating from 1819 to the early 1980s.  Most relate to presidential campaigns during the late 1800s.