A new acquisition at the Archives is a scrapbook of William N. Hughes (1843-1920?).  Hughes was born in Maine and his parents were both born in Nova Scotia.  He was married in 1881 to Leanora Goodwin and lived with her in Melrose, Massachusetts.  He was a member of Royal Arch Chapter as well as Knights Templar, there in Melrose.  This fascinating scrapbook was donated by the Historical Society of Old Yarmouth.

The next section begins with all types of Knights Templar ephemera starting in 1895.  There is evidence from the ticket stubs that William N. Hughes attended the huge 26th Triennial Conclave in Boston in 1895. This conclave was attended by over 30,000 Knights Templar from all over the United States. Grover Cleveland, president of the United States at the time, was invited..

Among over 100 Masonic calling cards that he collected in the scrapbook is Hughes own calling card, identifying him as a member of Hugh de Payens Commandery in Melrose, Massachusetts. These all have different insignia from different commanderies.  Hughes gathered calling cards from Sir Knights from as far away as Clayton, Illinois and St. Louis, Missouri.  These calling cards were probably created expressly for the 26th Triennial Conclave in 1895 in Boston. 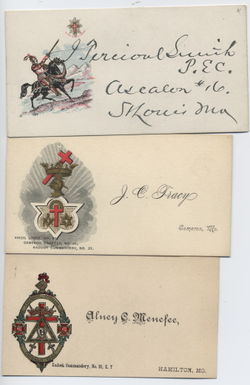 There are several other collections of Masonic calling cards in the Archives (MA 009 & MA 030), however none with such a rich context as the Hughes scrapbook.

In addition to being a printer and a Freemason, William N. Hughes was an amateur fisherman.  In the photograph on the left, Hughes can be seen taking his friends out on a fishing trip. Hughes is the man holding the tiller, the second from the right.

Canoeing, or so the newspapers called it, was another hobby of William N. Hughes.  Hughes' "canoe" was built in the shape of an Eskimo kayak. The scrapbook includes a photograph of Hughes in the canoe.  Frequently Hughes would take the canoe out in the Boston harbor and swim from it.  He made these swims up until he was 75 years old.  These swims are documented in various logs and calendars in the scrapbook, along with newspaper articles documenting these events.