Wake Up America Day
"Keepers of Tradition: Art and Folk Heritage in Massachusetts" Extended Through June 7, 2009!

"The ladies of Boston, Mass., having for one year considered and approved of the laws and principles of the Independent Order of Odd Fellows, yet, feeling their sympathies could not extend in a sufficient degree to the female portion of the community, we, the undersigned, come forward to meet the demand:
Therefore, on July the fourteenth (14), 1845, we organized in East Boston, State of Massachusetts, for mutual aid and benefit, an association to be known and entitled, 'United Order of Independent Odd Ladies.'"

The above comes from the Preamble to the Supreme Constitution of the United Order of Independent Odd Ladies. Clearly feeling that they should be admitted as equals into the Independent Order of Odd Fellows, and not being able to, they made the decision to start their own order (in 1845, no less). By choosing such a similar name and stating that they "approved" of the laws and principles of the Independent Order of Odd Fellows, these women were clearly making a statement along the lines of: we are in sympathy with the objects of your fraternity, but if you won't allow us to join then we'll start our own group, based on the same principles, and with a defiantly similar name. 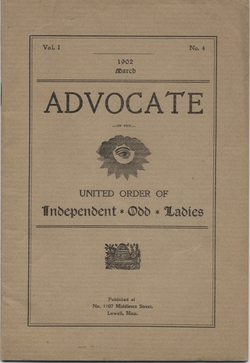 The United Order of Independent Odd Ladies should not be confused with the Daughters of Rebekah, which was formed six years later, in 1851, as the women's auxiliary group of the Odd Fellows. What makes this women's auxiliary group different from the all-female Odd Ladies? As Arthur Preuss in his 1924 book Dictionary of Secret and Other Societies succinctly states "though men may become members of the Rebekah Lodge, no woman may become an Odd Fellow." (This, however, is no longer true: the Independent Order of Odd Fellows are still around, and they now accept both men and women as Odd Fellows. Also, check out our earlier post on a very popular Odd Fellows print.)

One wonders whether, even if the Daughters of Rebekah had been formed a few years earlier, the women who founded the Odd Ladies would have considered this sufficient to meet their demands, or would still have formed their own group.

Of course, ideas of inclusion and exclusion are often subjective and are often a reflection of the times. It's interesting to see that in starting their own organization, the Odd Ladies had their own ideas of who was qualified to join their group. This is tellingly revealed in the first "Object of the Order":

"The objects of this Order shall be, to unite fraternally in Love, Union and Charity, all acceptable white women of Protestant faith, of good moral character, sound bodily health, temperate habits and a reputable calling, who believe in a Supreme Being, Creator, and Preserver of the Universe."

Among the items we have in our library collection related to the United Order of Independent Odd Ladies are three issues of their own magazine, Advocate, which was published in Lowell, Massachusetts in the early 20th century. The cover of the March 1902 issue is seen here today.

In our Archives we have a number of primary documents related to the Odd Ladies. This large collection (FR 025) consists of Odd Ladies letter books, minute books, and financial documents from several Odd Ladies organizations in Maine, dating from 1896 through 1926.

The Constitutions quoted above are from:

Posted at 09:00 AM in Fraternal groups (not Masonic), Posts by Jeff Croteau, United Order of Independent Odd Ladies | Permalink | Comments (2)

I recently purchased a small plate which read U.O. of I.O.L. 1845- 1895. Was doing research to find out what it was and came upon this site. Cannot find any of the symbols from the plate on any web site.