"To reform drunkards and to prevent others from becoming drunkards." 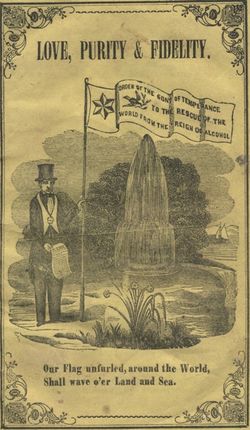 The Sons of Temperance was the oldest of many temperance and total abstinence "secret societies" that existed in the United States in the nineteenth century. It was founded in 1842 in New York City by sixteen men, who met for the first time on September 29, 1842 at Teetotallers' Hall at 71 Division Street. Up until the founding of the Sons of Temperance, temperance and total abstinence societies only required members to pledge that they would abstain from consuming alcohol. The Sons of Temperance took this pledge many steps further: the organization was a fraternal group and a mutual benefit society which incorporated passwords, grips (i.e. handshakes), and rituals into the organization's activities, and also provided both life and funeral benefits to its members. But their stated aim was blunt and to the point: "to reform drunkards and to prevent others from becoming drunkards."

Pictured above is a detail from the cover of an 1851 edition of a book that was originally published in 1847, entitled The Order of the Sons of Temperance: Its Origin, Its History, Its Secrets, Its Objections, Its Designs, Its Influence: Comprising a Full, Authentic History of This Deservedly Popular Institution from Its Origins to the Present Time. It depicts a member of the Sons of Temperance, wearing a collar, holding a pledge, and standing by a fountain of water (drinking a glass of water was part of the initiation ceremony - "the beverage prepared by God himself"), beside which there is a staff with a banner that reads "Order of the Sons of Temperance to the Rescue of the World from Reign of Alcohol."

The question that comes to mind when first learning about temperance and abstinence societies in the United States in the early 19th century is, why was there such a strong movement toward abstinence from alcohol? There are a combination of factors, but W.J. Rorabaugh's The Alcoholic Republic: An American Tradition goes a long way in giving context to the social role that the act of consuming alcoholic beverages played in American life in the 18th and 19th centuries, and also shows how it laid the groundwork for the temperance movement. In the introduction to his book, Rorabaugh writes of being startled to discover that "Americans between 1790 and 1830 drank more alcoholic beverages per capita than ever before or since." But what I think makes this most interesting is to see how directly this led to an influential social movement in the 19th century. As Rorabaugh points out, knowing about the vast quantities of alcohol that were consumed in America during the late 1700s makes it easier to understand the temperance movement that started in the 1820s. 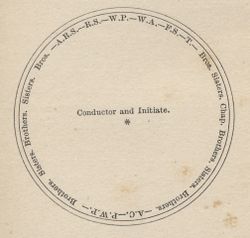 Another book in our collection, Blue Book for the Use of Subordinate Divisions of the Order of the Sons of Temperance, contains the ritual of the Sons of Temperance. It perfectly illustrates how the first fraternal temperance society sold the idea of the benefits available to those willing to come together for a shared purpose. In the initiation portion of the ritual, the head of the group, called the Worthy Patron, addresses the candidate by saying:

Intemperance is peculiarly a social evil. We therefore resist its terrible power by a social and fraternal Combination. We join hand in hand, and heart to heart, in this Institution, to protect ourselves and meet a common foe with victorious power of organization.

In brothers and sisters here assembled, you behold a type of our mission's fulfillment. This is a sober world in miniature; and we seek to enlarge this circle of sobriety until it shall embrace the entire race of Man.

Interestingly, this idea of a communal "circle of sobriety" was not simply spoken of, but was part of the actual "floor work" of the ritual, as can be seen in the illustration above from the Blue Book, which included this illustration to instruct members of various "Divisions" (i.e. lodges) how they should arrange themselves during this part of the ceremony. Below this circle, the ritual instructs the members to join in a rousing sing-along, with temperate words, arranged to a tune not usually associated today with temperance, Auld Lang Syne:

Once more we here the pledge renew
Of strict FIDELITY;
Still to our maxims ever true,
To LOVE and PURITY...

The Order of the Sons of Temperance: Its Origin, Its History, Its Secrets, Its Objections, Its Designs, Its Influence: Comprising a Full, Authentic History of This Deservedly Popular Institution from Its Origins to the Present Time. Syracuse: Agan & Summers, 1851.
Call number: RARE HV 5296 .S6 L8 1851

Blue Book for the Use of the Subordinate Divisions of the Order of the Sons of Temperance. Boston: The National Division of North America, 1872.
Call number: HV 5296 .S6 B4 1872

Posted at 09:00 AM in Fraternal groups (not Masonic), Posts by Jeff Croteau, Sons of Temperance, Temperance movement | Permalink | Comments (0)