"To reform drunkards and to prevent others from becoming drunkards."
'Light on Masonry', the old and the new

An "affable and gentlemanly man" 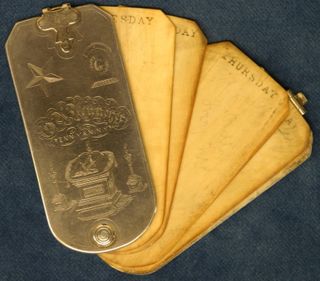 Even an object smaller than a deck of cards, such as this pocket-sized silver memo book, can offer a window onto a past life.

This silver book's owner’s name, Oliver Arthur Pennoyer (1826-1882), his town and a selection of Masonic symbols decorate one side.   A date and an engraved image of Niagara Falls embellish the back.  These elements--and the book itself--are clues that reveal much about Oliver Pennoyer.

In his 20s, Pennoyer moved to Penn Yan, New York, where he worked in the county clerk’s office.  In 1854 he joined William C. Morris in running a downtown jewelry store.  Their weekly ads proclaimed they sold “the fullest and most complete stock of watches, clocks, jewelry and fancy goods that has ever been offered to the citizens of Yates County.”  Although the partnership lasted only a few months, it appears that the business associates formed a more enduring connection.  Oliver Pennoyer married Margaret L. Morris (1830-1912)  (possilby a relation of Pennoyer's partner) on June 13, 1854.  Although we do not know where the couple spent their honeymoon, a trip to famed Niagara Falls, 130 miles from their home, is an intriguing possibility.

Pennoyer’s memo book may have been a gift to mark a new chapter in his life.  Or, perhaps he designed the book himself and had it made and engraved by associates in the jewelry business.  Articles in the local paper noted that Pennoyer practiced “rare and beautiful penmanship.”  The flourishing designs surrounding his name on the memo book may allude to Pennoyer’s calligraphic skills.  His obituary suggests that Pennoyer could have engraved the book himself as,  "He was a skillful engraver, and had expressed a desire to become employed in the silver plate works."

A man of many interests, politics also captured Pennoyer’s attention.  He represented the Whigs at an 1854 county convention and later served as the Schuyler County Clerk.  He also held various county positions after he moved to Illinois, worked for the Grant administration, passed the Illinois bar and engaged in the insurance business.

Although records of his Masonic affiliation are elusive, the engraved symbols on the book show that Freemasonry held a place in Pennoyer’s life.  With so many pursuits, he doubtless needed to track his engagements.  The ivory pages of this memo book--originally the book held one for every day of the week except Sunday--gave him a place to note an appointment in pencil.  He could easily erase the note when done.

In 1855 a contemporary described Oliver Pennoyer as an “affable and gentlemanly man.”  This elegant accessory serves that description.  Its owner must have cherished the book as a precious reminder of the year he embarked on many new ventures.

The back of the memo book features an image of Niagara Falls.  National Heritage Museum, 2005.040.  Photograph by Jonathan Olly

Many thanks for help from the Rockford and Penn Yan Public Libraries in tracking down these sources.