Gilbert Imlay (1754?-1828) has variously been described as soldier, surveyor, adventurer, writer, conman -- and cad.  He swindled land from Daniel Boone (among others) and is believed to be the cause of feminist writer Mary Wollstonecraft's (1759-1797) attempted suicide.

Born in New Jersey, Imlay was a lieutenant in a Continental regiment and went west to make his fortune when the Revolutionary War ended.  He began as a land surveyor but by 1785 was already heading back east, in debt and wanted for unscrupulous land deals.  After losing money in yet another investment scam, Imlay disappears in 1787 and next surfaces in London as an author, and friend and lover of Mary Wollstonecraft.  After the birth of a daughter, Fanny, their liaison ends around 1796 and Imlay remains in Europe until his death in 1828 which is believed to have occurred on the Isle of Jersey.

If Gilbert Imlay is an unfamiliar name to you, it's not so surprising.  As Wil Verhoeven puts it in his new biography, Gilbert Imlay: Citizen of the World, “Although by no means a major historical figure in his own right, Imlay unwittingly acted as an interface between figures of much greater historical significance.  Their diverse and often mutually exclusive ideas and ambitions, dreams and schemes he frequently borrowed and then disseminated across continents and across the Atlantic, whilst invariably serving his own, usually less than honorable interests.”

I hadn't come across Gilbert Imlay before reading Robert Morgan’s biography of Daniel Boone and became more interested when I discovered a copy of the 3rd edition of his A Topographical Description of the Western Territory of North America [RARE F 352 .I33 1797] in our collection.  You may remember from our previous post on Daniel Boone that not only did he cheat Boone of land, in later editions of his 1792 publication (such as ours), he included the chapter about Boone which first appeared in John Filson's The Discovery, Settlement and Present State of Kentucky without attribution (not an uncommon practice in the days before copyright).

Of the many ways Imlay reinvented himself through the years, the most improbable, it seems, is his short stint as an author. Imlay is on record as having published 2 books, the aforementioned travel guide and a novel, The Emigrants, or the History of an Expatriated Family in 1793.  Both works were published in London to generally good reviews.  His novel, published after Imlay met Mary Wollstonecraft, follows the adventures of an English family in America and espouses a progressive social agenda.  Some critics find its feminist tone more than could be reasonably expected of an 18th century man and attribute authorship to both Imlay and Wollstonecraft.  An entry in Benet's Reader's Encyclopedia of American Literature wonders why, given Imlay's own colorful career, he bothered to write a work of fiction at all; a memoir "might well have been superior to his novel." 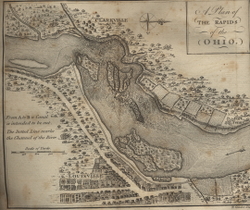 But it is Imlay's first effort for which he is best known.  In true Imlay fashion, he describes himself as 'Captain' Imlay, the 'Commissioner for laying out Land in the back Settlements' and an 'intelligent and lively author'.  Topographical Description.... is written as 'a series of letters to a friend in England' and tied together by commentary from an English 'editor' who initially asked for 'a complete description of the western country of America'.  Though Imlay claims in the introduction 'it is certain that no work of the kind has hitherto been published in this country' most critics cite Letters from an American Farmer by Crevecoeur as something of a template -- and that both authors draw heavily from John Filson's more original work.  However, most also note that Imlay takes the genre a bit further and describes Western expansion as the obvious extension of the American Revolution.  According to Verhoeven, Imlay foresees "the wilderness frontier as the centre of a future American empire."

While Topographical Description.... includes detailed reports of roads, waterways, soil, flora and fauna and, basically, any and all information anyone thinking of settling in America would need to know, he also includes four maps.  Pictured above is 'A plan of the rapids of the Ohio'.  In 'Letter III....about Ohio", Imlay writes:  "The Rapids of the Ohio lie about seven hundred miles below Pittsburg, and about four hundred above its confluence with the Mississippi.  They are occasioned by a ledge of rocks that stretch across the bed of the river from one side to the other, in some places projecting so much, that they are visible when the water is not high...The fall is not more than between four and five feet in the distance of a mile; so that boats of any burden may pass with safety when there is a flood; but boats coming up the river must unload."

The other maps include: 'A map of the western part of the territories belonging to the United States of America drawn from the best authorities', 'A map of the Tennassee (sic) government formerly part of North Carolina taken chiefly from surveys' by Gene D. Smith and other, and 'A map of the State of Kentucky from actual survey by Elihu Barker of Philadelphia'.

There's no evidence Gilbert Imlay ever returned to America, but surely his work encouraged many to emigrate, and still others to write about it.  Irish Poet Thomas Moore, in highlighting the romantic nature of his work, proclaimed it 'would seduce us into a belief that innocence, peace, and freedom has deserted the rest of the world for...the banks of the Ohio."  Add 'marketeer' to the list of ways to describe Gilbert Imlay!