On a recent trip to Virginia, I stopped in a used book store and inquired about Masonic or fraternal items.  The bookseller produced a couple things then said he was sure he had something about digging up the treasure in the Bruton Parish Churchyard, and that he thought Freemasons were involved. When I professed ignorance about the event he went on to tell a fantastic story about a secret vault in Williamsburg, VA that allegedly contains the original Shakespeare plays, additional writings by Francis Bacon (1561-1626) and other valuables.  To fully appreciate the story it’s helpful to 1. believe Sir Francis Bacon actually wrote the plays attributed to William Shakespeare (1564-1616); 2. believe that Bacon was the illegitimate son of Queen Elizabeth I (1533-1603), the Virgin Queen (and for whom Virginia was named), and Robert Dudley, Earl of Leicester (1532-1588); 3. believe that Bacon traveled to America; and 4. that Bacon is the true founder of America, the founder of Freemasonry and essentially wrote the Declaration of Independence and the Constitution of the United States.  Whew!

As soon as I had a chance, I ‘googled’ Bacon and Bruton and found some 114,000 ways to learn more about the story.  Several of the results seemed well researched and a 3 part series from The Piker Press was helpful as an introduction.  But I was anxious to return to our library and the extensive resources on Freemasonry in our collections. I wondered what if anything I'd find about the Bruton Vault in some basic Masonic reference sources.... 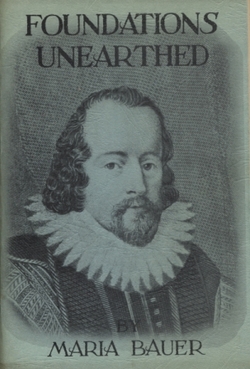 Coil's Masonic Encyclopedia doesn't include an entry for Bruton but under Sir Francis Bacon does mention that some maintain his writings, particularly The New Atlantis,  "is relied on to assert his connection with Freemasonry."  Nothing more definitive in 10,000 Famous Freemasons where it's noted that Bacon was 'thought by some to be a Rosecrucian" and that The New Atlantis "was an early influence on the development of the craft."

Searching through several indexes did provide some mention of the Bruton Vault, Bacon and the Vault, and/or Bacon and Shakespeare in various journal articles; a few titles in our catalog did as well.  One new book I thought might include some information is Conspiracy Theories & Secret Societies for Dummies, but no luck.  Another new book, Master of the Mysteries: The Life of Manly Palmer Hall didn't disappoint.  Manly Hall (1901-1990) figures into the Bruton story in at least two significant ways:  several maintain that Hall's Secret Teachings of All Ages (which includes a chapter on the Shakespeare-Bacon controversy along with Bacon's portrait neatly superimposed over Shakespeare) provides a basis for the hidden symbols and mystery that buttress the story and, perhaps more importantly, Hall's second wife was Maria Bauer, (1904-2005).

While the new biography about Manly Hall is a full look at the life of this interesting, complex man, it does provide some interesting background details about the Bruton story as well.  Maria Bauer first heard Hall speak while living in New York but convinced her first husband to move to California to be closer to Hall and his Philosophical Research Society.  Interested in the occult and convinced she was clairvoyant, one day while volunteering at Hall's library, Bauer struck up a conversation with someone waiting to see Hall.  The visitor said he was a Shakespeare scholar who had deciphered codes hidden in the plays that told of a treasure hidden by Bacon under a church in Virginia.  Bauer had once received a woven cloth with images from Williamsburg, including the Bruton Parish Church, so she felt an immediate affinity and decided instead of just talking about it, they should go there and start digging!  Somehow, in 1938, Bauer convinced Rockefeller Foundation and Bruton Parish Church officials to begin excavating the churchyard.  The image above shows the cover of Bauer's first book about the experience with a portrait of Francis Bacon (not unlike the image in Hall's work mentioned above).  She published several other works about it, went on to marry Manly Hall in 1950, and continued her quest to uncover the vault until she died.

The initial dig in 1938 was followed by several other (both sanctioned and non-sanctioned) attempts.  While in 1938 they did uncover the foundation for the original 1676 Bruton Church, to date no vault and no treasure has been located.

So, is there anything to the Bruton Vault story?  I have no idea.  I'd be curious to hear from anyone who does know of any other compelling details, particularly involving a Masonic connection.  For those who find the whole story outlandish, perhaps a little more context is in order.  The Shakespeare authorship question has existed for hundreds of years and during the late 19th-early 20th century, Francis Bacon was a popular choice as the 'real' author.  Similarly, many significant archaeological discoveries were made around that time (e.g. King Tut's tomb in 1922) so it's not too hard to imagine church officials might be persuaded to allow the dig.  However, a 1993 article by Frederick Kozub in Skeptical Inquirer, a journal devoted to revealing the science behind pseudoscientific claims, ("Follow-up on the Bruton Parish Church's vault excavation", v. 17, no. 3, Spring 1993) essentially ends the discussion by stating the 9-person archaeological team allowed to dig in 1991 found no evidence of a vault anywhere under the churchyard.

What I did find is that the historical renovations one can see above ground in Colonial Williamsburg, and the artifacts recently uncovered beneath nearby Jamestown and now beautifully displayed in the new museum there are well worth time, interest and attention!

Hall, Manly Palmer.  An Encyclopedic Outline of Masonic, Hermetic, Qabbalistic, and Rosicrucian Symbolical Philosophy: Being an interpretation of the Secret Teachings Concealed within the Rituals, Allegories, and Mysteries of all Ages.  Los Angeles:  Philosophical Research Society, 1975.    Call number:  11 .H173 1975  A reprint of the 1928 edition.

What an interesting personal connection to this story! Thanks for reading our blog. - Jeff

My ancestor Thomas Ballard laid the cornerstone at Bruton Parish. I grew up in Williamsburg and knew of the story of the vault and its location as a child. No one from the Church will acknowlege it's existence. Though it was common knowledge in the early 1960's. The church removed the tombstone located just to the left of the steeple entrance. Ten years ago. There is a plaque in the pew area with his name.
The location of the vault is marked by a brass brick in the very center under the steeple entrance way. When I was there last the brick was covered by a pedalstal with a sign. There you have it, believe it or not.

Hi Chris, I thought the story was 'out there' but you certainly put it into perspective that it didn't even make the cut for Conspiracy Theories & Secret Societies for Dummies. Thanks for sharing your thoughts and more background information.

Greetings to all REAL Ascended Master Students and
Baconian Historians on behalf of the Ascended Master Saint Germain! How appropriate for this
particular posting to be in existence just prior to
the annual celebration of 'Christopher Columbus Day'...October 12th! To anyone who is truly interested in the TRUTH concerning the Sacred,
'Great Seventh Seal' located in the backyard of
Bruton Parish Church, please locate and read a very
timely book called "Unveiled Mysteries," (Original)
by Godfre Ray King; first published in 1934 by the
Saint Germain Press: www.saintgermainpress.com
To all detractors and those who remain very discordant and vicious towards many of us who
personally knew and studied with the late Manly
and Marie Bauer Hall in their home located in
Los Angeles, California; WE KNOW DEEP WITHIN the
DIVINE TRUTH concerning Lord Bacon's great "Love
Gift" that was carefully buried centuries ago by
Divine Providence and Guidance, and it is just
a matter of time now before the entire contents
of the 'Great Seventh Seal' is professionally
and properly, publically excavated, and all the
Sacred Contents and other Artifacts brought to
Light on behalf of the American People! I am not
interested and never have been involved with the
legacy and Metaphysical Research concerning the
Sacred Bruton Vault for personal gain, fame, or
fortune; I do not have a group or following, but
have carefully, for the last 22 years, researched
and filmed, documented and interviewed several
talented and gifted, blessed individuals who have
also been directed Divinely to work on the Sacred
Sites of both Bruton and the Oak Island Legends
and Legacies. For more information, please feel
free to contact me at: Iamsacredbaconsvaults@comcast.net ...and 'I AM'
the real Fletcher Richman; God bless you, and
"GOD BLESS AMERICA!" (Many are called, but few
are chosen)...

We looked into the Bruton Vault story, and found it mighty thin. Since we were limited on space in the Conspiracy Theories & Secret Societies For Dummies book, we had to stick to some of the better known, or better documented theories. So, sadly, some of the daffier ones got left on the cutting room floor.

Fletcher Richman has been carrying on about the Bruton Vault for years, but has very few believers on his side. Apart from the downright goofiness of burying 144 secret vaults around North America in far-flung parts of the the as-yet unexplored continent (Minnesota? Nevada?), there's also the delusional Bacon claims. Bacon was a remarkable man on his own merits. Claiming he wrote Shakespeare's works, was sprung from Elizabeth I's womb, faked his death and lived to be 123 is really gilding the lilly.

As for the Bruton Churchyard, it's true that Hall's wife did indeed discover the old church's 1623 foundation after digging illegally. Subsequent "expeditions" have been mounted (right where the Bacon believers have directed the diggers, by the way), including inserting rods into the ground in search of the supposed vault—none of which produced any evidence whatsoever. Like the resistance to digging up the basement of Rosslyn Chapel, the Bruton church is more than a little squeamish about letting excited treasure hunters armed with backhoes go poking around a 400 year old burial site. No matter how 'world changing" the discovery might be.

The other bit of lunacy involved in this tale is that headstones in the Church cemetery contain mysterious symbols that point the way to the buried treasure, if only they could be deciphered. Ah yes, if only. The tale on these is that Bacon designed them, had them carved in England, and then sent them by ship to America where they would be "planted' in the churchyard cemetery as a treasure map.

And I am the real Anastasia.