In a previous post, we talked about the spread of Freemasonry throughout the world, and the means by which it got there, in most cases by colonialism.  Today, we're taking a look at how one man in Afghanistan decided to become a Freemason in India in the early 20th century.

Habibullah Khan (1872-1919) succeeded his father to the throne of Afghanistan in 19 01.  In his coronation speech he announced his interest in pursuing policies of national unity, resistance from foreign aggression, and reform.  His goal was to achieve an absolute Afghan central government.

In 1904, Habibullah Khan founded the Habibya school for boys.  Students were taught math, geography, calisthenics, as well as English and Urdu.  He also established a military college where officers could get training. Between 1901 and 1904, Habibullah Khan bought equipment for local industry.  He also continued to improve communication and trade.  He built new roads and demonstrated that travel was important.

In 1907, at the request of the British government, the Amir of Afghanistan was invited to visit the Indian frontier.  Lt. Col. A. Henry McMahon, Chief Commissioner of Baluchistan, accompanied the Amir and was in charge of the entire visit. 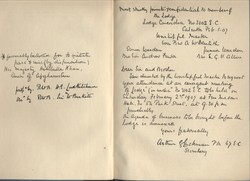 After a few days in India, the Amir expressed interest in becoming a Freemason. McMahon was surprised because he did not understand the Amir's motives and didn't think that the Amir wanted to bring Freemasonry to Afghanistan.

McMahon finally realized that the Amir was very earnest about his request to be initiated into Freemasonry. Habibullah told McMahon that he had met good men who were Masons and that he knew Freemasonry to be a good thing.

In the name of diplomacy, McMahon received permission for the Amir's initiation from Lord Kitchener, District Grand Master of the Punjab and Grand Master, the Duke of Connaught.  In the facsimile letter shown here (from a book published in 1936), Lord Kitchener votes to accept the Amir into the lodge.

His Majesty Habibullah Khan, Amir of Afghanistan, was initiated into Freemasonry in Calcutta, India.  This occurred at Lodge Concordia, No. 3102 which had a small exclusive membership, restricted to British civil and military officers of high standing.  The first, second, and third degrees were all conferred upon the Amir. The ceremony was conducted in English, with Henry McMahon interpreting the entire Masonic ceremony into Persian for the Amir.  He took his Masonic oaths on a Koran that is now at the Library of the Grand Lodge of England.

Because knowledge of his Masonic affiliation could be used against him by his enemies in Afghanistan, the Amir's membership had to be kept a secret from his staff, soldiers, entire entourage, and the public. Although secrecy about his Masonic membership was kept in India, when the Amir returned to Afghanistan rumors about the Amir being a Freemason started to surface.  The leading mullahs seized on this opportunity to make trouble for the Amir.  Finally, the Amir announced publicly that he was a Freemason, that he was proud of being a Freemason, and that he had become one to benefit Afghanistan.

Habibullah Khan was impressed by Western (British) techonology he had seen in India, and when he returned to Afghanistan he made further attempts to Westernize the country. For better or worse, he saw Westernization as a step toward modernization for his country.  It seems that, to Habibullah, becoming a Freemason may have been a personal manifestation toward Westernization as well.

Today's illustration comes from the following book in our collection:

Posted at 09:00 AM in Freemasonry, Freemasonry and Colonialism, Posts by Catherine Swanson | Permalink | Comments (0)