What is a Knights Templar Conclave?
The Bruton Vault Story 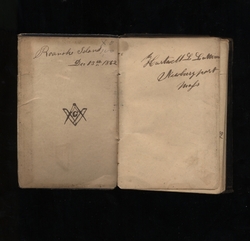 In the front of an 1859 edition of Thomas Smith Webb's The Freemason's Monitor are some interesting ownership marks that reveal evidence of a Union soldier who owned this book during the American Civil War.

The book once belonged to Hartwell L. Lattime of Newburyport, Massachusetts. As you can see in the photo here, he has written "Roanoke Island, Dec 13, 1862" on the inside cover and drawn the Masonic square and compasses with a G set in it, below that. On the opposite page he has written his name and hometown.

A little research reveals that Hartwell Lattime enlisted as a Private on August 24, 1862 at the age of 22. He belonged to Company A of the Massachusetts 8th Infantry Regiment. According to a history of this unit, Companies A and C of the 8th Regiment detached from the regiment and were stationed at Roanoke Island, N. C., December 4, 1862 to July 12, 1863.

The Battle of Roanoke Island was fought on February 7-8, 1862, ten months before Lattime arrived. The Union Army, after winning the battle of Roanoke Island, quickly occupied the island. Hartwell served with the Massachusetts 8th Infantry Regiment until August 7, 1863, when he and the rest of the regiment mustered out after having been ordered home on July 26, 1863.

By looking at all of the evidence above, we can conclude that it appears that just a week after his arrival at Roanoke Island, Lattime wrote the date, his location, his name, and his hometown in the book. But when did Lattime become a Mason?

According to the records at the Grand Lodge of Masons in Massachusetts, Lattime was raised and became a member of St. John's Lodge in Newburyport on November 6, 1862. At a time when there was usually a one-month delay between receiving each of the three degrees, Lattime received all three degrees in one day. By looking at the history of the regiment that Lattime belonged to, we can see that he became a Mason while still in Massachusetts, stationed at Camp Lander in Wenham, Massachusetts, just a few months after enlisting, and just a couple of weeks before the 8th Regiment boarded the steamship Mississippi in Boston on November 25, 1862 to head down to Morehead, NC. While we don't know for sure, it's possible that Lattime became a Freemason on a visit home while his company was stationed at Camp Lander where the 8th Regiment was stationed from September until late November.

Naturally, there is much more that could be explored about Lattime's time while on Roanoke Island if further research were conducted. Seeking out possible regimental histories or diaries of other soldiers stationed on Roanoke Island at the same time as Lattime would go a long way in pulling the thread that started with just a few notations that a Union soldier wrote in the front of a book one day in 1862.

As it turns out, the history of Roanoke Island after the battle in February becomes quite compelling. Lattime's time on Roanoke Island overlaps with the beginning of an interesting community that was established on the island:

"During the first few months of the Union occupation of Roanoke Island, over 250 former slaves settled in a camp close to Union headquarters. By the end of the year, the number had grown to 1,000. Most of the former slaves had escaped to the island from the North Carolina mainland; many were strangers to each other. Nevertheless, they set about to establish a thriving community, including their own school and several churches."

The quote above is from Patricia C. Click's website about the Roanoke Island Freedmen's Colony, where you can go to find more information about this interesting period in the history of Roanoke Island and the Civil War.

If you're looking or more information about Civil War regiments and soldiers, a good place to start online is the National Park Service's Civil War Soldiers & Sailors System.

Today's illustration is the inside front cover of: