The Frenzy of Anti-Masonry in Vermont

Last week we mentioned some of the anti-Masonic collections in our Library & Archives. Today, we'll be looking at some interesting archival material from our collections that relates to anti-Masonry in Vermont in the 1820s and 1830s.

When anti-Masonry took hold in the Northeast of the U.S. in the late 1820s, Freemasonry became suspect in most states and the effects were felt strongly. Because of societal, religious, and political pressures, many Masons left their lodges during this time period. In fact, so many men left their lodges during the 1820s and 1830s that many Masonic lodges closed. In New York State, out of 480 lodges, only about 75 lodges remained open. In Massachusetts only 56 were still active out of 108. However, in the state of Vermont no lodges were active during the immediate aftermath of the Morgan Affair.  Lodge after lodge in Vermont surrendered their charter to the Grand Lodge, until every lodge was charterless or dormant. For a short time the Grand Lodge of Vermont itself ceased to have meetings.

Why was there such a frenzy of anti-Masonry in Vermont?  There are a number of reasons.

First, there was politics. There were national leaders and statesmen who were deeply devoted to the National Republican Party which had controlling influence in Vermont.  The people of Vermont followed these political ambitions as well as aligning themselves with the Anti-Masonic Party.

Second, there was economics. William Preston Vaughn (in The Anti-Masonic Party in the United States: 1826-1843) has ventured that it's possible that Freemasonry was doing "too well" in Vermont during the period leading up to the Morgan Affair. He writes:

"Masons in Vermont seemed to be drawn mainly from the wealthy and prominent men of the town, and this discrimination rankled with poor farmers and villagers. A careful examination of Antimasonry in the Green Mountain State shows that the movement and party became the strongest in the poorest villages - those with the lowest tax assessments and property valuations per lot and dwelling...Because most of the prominent legislators and lawyers were Masons, and these men dominated both the National Republican and Democratic parties, the disadvantaged flocked to the banner of Antimasonry."

And, finally, there was religion. The ministers of Vermont preached vigorously against Freemasonry and about the supposed un-Christian nature of Masonic lodges. This was further fueled by the perceived threat of Freemasonry to many of the congregations. Masonry, to the clergy, could be seen as a potential surrogate religion and could possibly lure congregants from the church to the lodge (this, despite the fact that many Masons were also members of churches). Churches and their Boards of Deacons closely reviewed their membership and required Masons to renounce their membership in various places of worship. Even before the Morgan episode, there were accounts of antagonism against Freemasonry in Vermont churches.  It took only the events surrounding the disappearance of William Morgan to spark older, deep-rooted conflicts.

In the collections at the Van Gorden-Williams Library and Archives, there is an interesting group of manuscripts which illustrates this frenzy of anti-Masonry in Vermont very well.  The collection, the Thetford Congregational Church Documents, 1829-1833 (MM 023), is a sequence of manifestos, petitions, resolutions, complaints, and protests concerning the members of the Congregational church in Thetford, Vermont which documents the congregants arguments both for and against having Freemasons as church members. 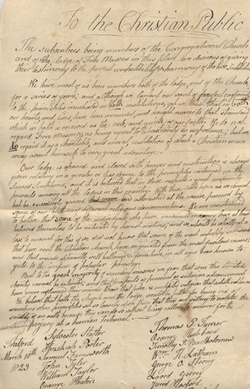 The manuscript seen here, "Manifesto of Free-Masons" (MM 023), dated 1829, at Thetford, Vermont is what started the difficulties within the Thetford congregation.  In this manifesto, the Freemasons of Thetford proclaim the harmony in both being a member of one's church and of one's lodge.

In 1833, a group of 32 members of the Thetford Congregational Church withdrew in protest over all the unresolved issues between Freemasons as church members.  In 1833, the church members and pastor, Elisha G. Babcock, finally asked an Ecclesiastical Council to assist them in deciding about whether the values of Freemasons and the church could co-exist.  The Council decided after much deliberation that Freemasons who were members of churches should refrain from all Masonic proceedings.

Of course, Freemasonry in Vermont eventually recovered. By 1846, The Grand Lodge of Vermont reported that there were now ten working lodges in the state.

Next time: how anti-Masonry during the 1820s and 1830s affected national politics.

Here are some suggestions for further reading related to the history of 19th-century anti-Masonry in Vermont: