Mary Devlin Booth
The Frenzy of Anti-Masonry in Vermont

Some people are surprised to find that our Library & Archives holds an extensive collection of anti-Masonic material. Why do we collect this material?

The subject of anti-Masonry - especially in early 19th-century America - is important to understanding the history of Freemasonry in America. Anti-Masonic material is collected by us in order to cover the breadth of topics related to Freemasonry, but specifically because, as the Masonic scholar William L. Cummings states in the foreword to A Bibliography of Anti-Masonry:

The events which followed the abduction of and mysterious disappearance of William Morgan in September, 1826, form an important chapter in American history, not alone on account of their effect upon the Masonic Institution, but also because of their influence upon the social, political and religious affairs of a large part of the country, some of these effects existing down to the present day.

While the disappearance of Morgan was not the only cause of the Anti-Masonic excitement of 1826-1840, it was the immediate incident which kindled the fire, the fuel for which was already laid.

Because of its importance from both a Masonic and a political standpoint, what is commonly referred to as the "Morgan Affair" has maintained its interest over the years that have passed since it occurred. 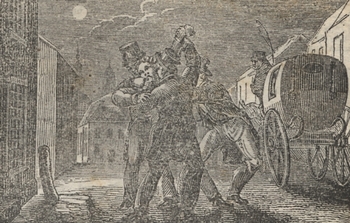 In addition to manuscript and archival material pertaining to anti-Masonry, we have many anti-Masonic books, pamphlets, newspapers, and sermons in our collection. These include John Quincy Adams’ Letters on the Entered Apprentice’s Oath (Boston: Young Men’s Antimasonic Association for the Diffusion of Truth, 1833), Letters on Freemasonry (Hartford, CT: Joseph Hurlburt, 1833), and Letters on the Masonic Institution (Boston: Press of T.R. Marvin, 1847). We also have numerous early editions of William Morgan’s exposé Illustrations of Masonry, first published in 1826, as well as several early years of Edward Giddins’s The New England Anti-Masonic Almanac, published in Boston beginning in 1829. We also have a collection of anti-Masonic newspapers, including 227 issues of The Banner and the Anti-Masonic Champion, both published in New York State in the years 1829 – 1833, as well as a number of individual anti-Masonic newspapers, published around 1831, in New York, Massachusetts, Vermont, Connecticut, and Pennsylvania, illustrating the geographical spread of anti-Masonry during this period. Much of our anti-Masonic material was once owned by the Masonic scholar William L. Cummings, who used much of his own personal collection for compiling his Bibliography of Anti-Masonry. Cummings's anti-Masonic collection came into our collection when we acquired his entire library.

Next time: The frenzy of anti-Masonry in Vermont.

If you're interested in bibliographies that deal with anti-Masonry, a great place to start are the first two titles listed below.