The Order of Tonti 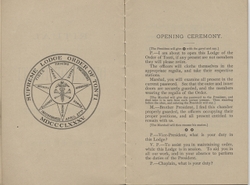 The Order of Tonti, incorporated on April 27, 1885, was a fraternal life insurance society that used a type of insurance system called tontine insurance. Tontine insurance was first introduced in the U.S. in 1868 by the Equitable Life Assurance Society of the United States. It quickly became a very popular product and, by 1905, two-thirds of all life insurance policies were tontine. (Tontine insurance traces its roots back to France in 1689, when Cardinal Mazarin, upon a suggestion from a Parisian-based Neopolitan physician and banker named Lorenzo Tonti, devised an investment plan for Louis XIV that now carries Tonti's name.)

Tontine insurance worked like this: a number of individuals paid annual sums to a common fund and, after the agreed upon term was up (often 20 years, but sometimes as few as 5 years), the survivors divided the proceeds, including all of the interest that had been earned. No dividends were paid out during the life of the investement, so investors, if they were still alive at the end, received their payment in one lump sum. In tontine insurance, it paid (quite literally) to be alive by the end of the term. In other words, the fewer the survivors, the larger the payment. From a financial perspective, the best thing that can happen when you've invested in tontine insurance is that you are the only survivor, so that the common fund gets paid to you alone. Now that doesn't sound like a plan that will stir feelings of fraternalism, does it?

As for the Order of Tonti, it only survived nine years. You can read a number of New York Times articles which report the demise of the organization - a demise that surprised many of its members and led to at least one rancorous meeting. 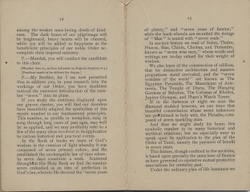 And now for a bit of the text from the ritual from the Order of Tonti, which discusses the seven year term of the insurance being offered. The President of the lodge addresses a new member:

My Brother, for I am now permitted thus to address you, in your research into the workings of our Order, you have doubtless noticed the extensive introduction of the number "seven" into its plans.

[The President then digresses into ancient and mythical occurrences of the number seven (which you can read from the image to the right) before getting down to brass tacks:]

And thus we might study for hours this symbolic number in its many historical and mythical relations; but we especially want to speak upon its application to the plan of the Order of Tonti, namely the payment of benefit in seven years.

This feature, though confined to few societies, is based upon precisely the same laws of finance as have governed co-operative mutual protective associations for centuries past.

Under the ordinary plan of life insurance we find the average expectancy of life computed at twenty-eight years. Experience has proven that upon an average payment of fifty cents at each assessment, a sum of one thousand dollars can be paid at death.

The conception of our Order is to give a life benefit at the expiration of seven years, and as seven years is the fourth part of the life expectancy, it follows that we must pay into the Treasury of Tonti four times as much, and thus it is made possible to accomplish in our Order, at the end of seven years, the same results met with in other fraternal societies, whose plan is consummated at the end of a man's life, be it twenty-eight years more or less, and that too at no greater cost."