J.J.J. Gourgas' signature, initials (shown at left), bookplate, notes and even reviews appear in the dozens of books from his collection held in our library.  His handwriting is distinctive and noteworthy.

John James Joseph Gourgas (1777-1865) was an important figure in Scottish Rite Freemasonry.  He was the first Secretary General and served as third Sovereign Grand Commander of the Northern Masonic Jurisdiction from 1832 to 1851.  In fact it's difficult to overstate his contributions to Scottish Rite Freemasonry.  At the 125th anniversary of the founding of the Supreme Council, August 5, 1938, Sovereign Grand Commander Melvin M. Johnson stated  “…the outstanding personality of the founders was John James Joseph Gourgas.  It was he who kept the Scottish Rite alive during the years when – but for him – it would have faded out.  It was Gourgas, assisted by [Giles Fonda] Yates, who re-vivified the Rite after the great anti-Masonic agitation, and then started our Supreme Council on its career to become the strong, virile and successful organization which it now is.” 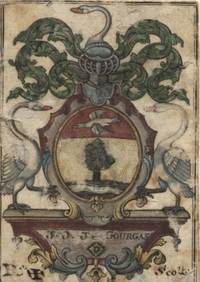 According to biographer J. Hugo Tatsch, Gourgas was born in Switzerland to a family of French Huguenots and moved with several family members to America in 1803.  He stayed briefly with them in Boston then moved to New York City where he started as an accountant and later prospered as a merchant.  He first became a Mason in 1806 with initiation into Lodge L'Union Francaise but made rapid progress so that seven years later he was elevated to the 33rd degree.  Gourgas remained in New York City for most of his life but often summered at the 'Gourgas Place' in Weston, MA.  He died in New York on February 14, 1865 and is buried in the family plot in Jersey City, New Jersey.

The colored bookplate (shown at left) is one of three known Gourgas family plates.  According to Tatsch, his plate "is identical to the oldest (that of his grandfather Jean Louis Gourgas) except for the deletion of “Jean Louis” and the substitution of the [his] initials."

J.J.J. Gourgas seems to have continued the family tradition of acquiring and maintaining a fine library where he could place his bookplate as well.  Peter Ross, in A Standard History of Freemasonry in the State of New York (available online here) notes "the magnificent library which he gathered around him was evidence of his studious habits and his faculty for study and research.  His written and printed productions show him to have been a man of wide reading, a thinker, and a scholar and one who was full of the purest aspirations for the Masonic banner whether it covered Lodge, Chapter or Consistory.”  Tatsch maintains "He was continually buying books in Paris; others were procured from London and in America.  He was deeply interested in the history of the Crusades and the Knights Templar, and was doubtless a believer in the descent of Freemasonry from the chivalric orders.”

His signature appears (to the left) on the title page of Toland's History of the Druids but his notes about the book cover the endpapers and appear throughout in margins.  His review of the preface?  "A modest and sensible preface with a large body of notes which display very considerable ingenuity and learning." 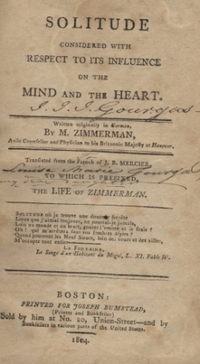 One book in our current collection (shown at right) found it's way here by way of a purchase.  Tatsch explains, “Early in Dec., 1937, a copy of M. Zimmerman’s Solitude Considered with respect to its Influence on the Mind and the Heart, bearing the Gourgas bookplate was called to our attention by a Boston bookseller and promptly acquired.  It settled what had been a perplexing question, for on the title page is the inscription, “J.J.J. Gourgas, To Louise Marie Gourgas, my dear daughter.”  There had been some confusion about the number of children Gourgas had and the identity of Louise Marie, buried in the Gourgas plot with her husband, who also was her cousin.

The Northern Jurisdiction of the Scottish Rite awards the Gourgas Medal, the highest honor it confers, for "Notably distinguished service in the cause of freemasonry, humanity or country."

Many resources exist on J.J.J Gourgas and still others about his extended family.  A few used here include:

The books where the images shown above are found include:

Initials:  Robison, John.  Proofs of a conspiracy against all the religions and governments of Europe, carried on it the secret meetings of Free Masons, Illuminati, and reading societies.  N.Y. : George Forman, 1798. Call number: RARE 19 .R666 1798

Signature:  Toland, John. A new edition of Toland's history of the Druids: with an abstract of his life and writings and a copious appendix, containing notes, critical, philological, and explanatory.  Montrose: Printed by J. Watt for P. Hill, 1814.  Call number: RARE BL910 .T7 1814

Dedication to daughter:  Zimmerman, J.  Solitude considered with respect to its influence upon the mind and the heart. Boston : Printed for Joseph Bumstead, 1804. Call number: RARE BJ 1499 .S6 Z53 1804