Freemasonry Throughout the World 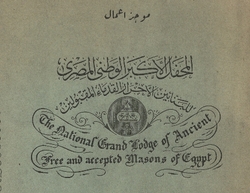 Most of Freemasonry's travels through the world not only followed the same routes as colonialism, but, in fact, spread throughout the world via colonialism. This might seem surprising at first, until you realize that two of the major colonial powers of the 18th and 19th centuries - England and France - were also places where Freemasonry originated and flourished. And where colonial powers traveled, Freemasonry traveled with it. Wonder how Freemasonry ended up in the United States? That's right - colonialism. Freemasonry was established in what is now the United States in the 1730s - in what were then the British colonies. Some excellent scholarship on Freemasonry has been published recently, including a book that came out just last year on the topic of Freemasonry and British colonialism - Jessica L. Harland-Jacobs's Builders of Empire: Freemasons and British Imperialism, 1717-1927 [Call number: 17.942 .H37 2007].

Pictured above is a detail from the cover of the Proceedings of the National Grand Lodge of Free and Accepted Masons of Egypt, 1922-1923, published in Cairo in 1923 [Call number: 17.962 .E32 1923]. The book is printed both in English and in Arabic. Freemasonry in Egypt began in the early 19th century with the first warrants for lodges coming from France and Germany. Later, in the 1860s, a number of other lodges were chartered by England, Scotland, and the Grand Orient of Italy. Eventually the National Grand Lodge of Egypt became the predominant Masonic body in Egypt. Its lodges conducted their ceremonies and business in Arabic, Greek, French, Italian, Hebrew, and German. When Gamal Abdel Nasser came to power in 1954, Freemasonry in Egypt started being suppressed and was eventually abolished by President Nasser in 1964. Although Nasser died in 1970, Freemasonry is still essentially non-existent in Egypt today, something that is true in many countries in the Middle East. As with many countries where Freemasonry is outlawed (or effectively banned through intimidation), there are lodges that practice in exile in other countries. Egypt is no exception to this - one example is Lord Kitchener Lodge No. 3402, a lodge that was founded in Cairo in 1909, but which is now located in Cyprus.

If you'd like to learn more about Freemasonry throughout the world, a great place to start is the two-volume set listed below. Volume 1 covers the Americas and volume 2 covers Africa, Europe, Asia, and Oceania. Also listed below is the book by Harland-Jacobs mentioned above.

Posted at 09:00 AM in Freemasonry, Freemasonry and Colonialism, Posts by Jeff Croteau | Permalink | Comments (0)