A Little Secret Ritual With Your Insurance, Perhaps?
Freemasonry Throughout the World 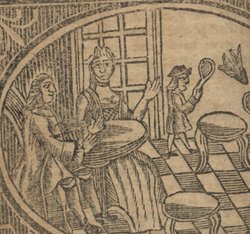 Daniel Fenning's The Universal Spelling-Book : or a New and Easy Guide to the English Language was originally published in London in 1756. This book was among the earliest spelling books available in the colonies. (Frances Austin gives a nice account of both Fenning and his book here.)

Our copy is a 4th edition, published in London by S. Crowder in 1760. Interestingly, I wasn't able to find a copy of this edition listed in either WorldCat or the English Short Title Catalogue, although, curiously, I did find it in the British Library's online catalog. Still, it leads me to me to believe that our library is one of the few that own a copy of this edition.

Our copy has several inscriptions in it as well, which tell us a little bit more about this particular copy. The first inscription reads "Elisha Harris, His Book: Bought in Providence, cost 40, In February the 24 Day in the year 1762." At that time it wasn't uncommon that most of the stock of a bookstore in the colonies would consist of books published in England and imported to America. It was also common at that time for bookstore owners (who were very often also printers themselves) to take it upon themselves to publish a copy of a book that was popular. In the American Antiquarian Society's collection, they hold a copy of Fenning's The Universal Spelling-Book that has an imprint "London, printed: Providence (Rhode-Island) re-printed and sold by John Carter, at Shakespear’s Head, near the Court-House., MDCCLXXXIII. [1773]." I haven't looked into how many booksellers were in Providence in 1760, but it's possible that our copy, bought by Elisha Harris in 1762, may have been bought from John Carter. And it's possible to speculate that Carter started publishing Fenning's book because he recognized, as a bookseller, just how popular the book was - with people like Elisha Harris buying up the London editions that he had imported to sell in his bookstore.

Pictured above is a detail from the wonderfully illustrated "Life truly painted, in the Natural history of Tommy and Harry," a moral tale that can be found in Fenning's 1760 Universal Spelling-Book.

Posted at 09:00 AM in Marks in books, Posts by Jeff Croteau, Printing History | Permalink | Comments (2)

Thanks for the comment. It does seem that the poem , which mentions a Mason among other trades, is likely referring to an operative stonemason - i.e., someone who works in the trade - rather than a speculative stonemason - i.e., a member of a fraternity who is not involved with stonework. That said, one can obviously have a different take on it. Thanks for commenting!