Is this woman a Freemason? It depends who you ask.
Daniel D. Tompkins: Governor, Vice President, and first Sovereign Grand Commander

Brown University historian Gordon Wood, who spoke at a Lowell Lecture on Benjamin Franklin at our Museum recently, observed he thought Carl Van Doren's classic biography on Franklin is the one that has best stood the test of time.  I wonder if the same might eventually be said about Robert Morgan's Boone: a Biography, published last year.  Morgan admits he entered an already crowded field of books about Daniel Boone when he began his first biography, and reviews many of the earlier efforts in his introduction.  Yet he maintains he was compelled to write about his boyhood hero because, through his research, he "found Boone a much more complex person than I had noticed before."

Morgan draws heavily on the Draper Manuscripts at the University of Wisconsin, a rich resource gathered by Lyman Copeland Draper (1815-1891) who's life's work was assembling information about the 18th century American frontier.  Among those Draper interviewed were Boone's son Nathan and his wife.  Though Draper planned to write biographies of Daniel Boone and other pioneers, he never actually did.  Many others have used his material, however, including, most notably, Boone biographers Ted Franklin Belue, Neal O. Hammon and Michael A. Lofaro.  One of the areas Robert Morgan ventures into that hasn't been covered before is Boone's ties to Freemasonry.  Although I thought his documentation somewhat scarce, he does provide some circumstantial evidence that Boone and other members of his family were Freemasons. 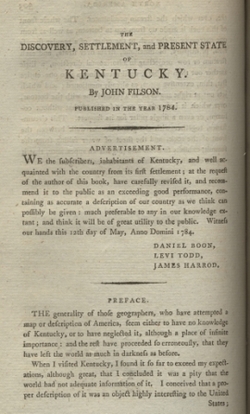 Most acknowledge John Filson (ca. 1747-1788) as the person who first brought wide attention to Daniel Boone.  He published The Discovery, Settlement and Present State of Kentucky in 1784 and included a chapter "The adventures of Col. Daniel Boon" written as an autobiography.  Interestingly, Gilbert Imlay (1754-1828), who swindeled some land from Boone, also lifted the chapter and placed it in his own work: A Topographical Description of the Western Territory of North America, (RARE  F 352 .I33 1797) -- the first page of our library's copy of the 'borrowed' chapter appears at left.  While Filson's work introduced Boone to a larger American audience at the time, Imlay, through his association with Mary Wollstonecraft, and her ties to many of England's literary figures, broadened his fame to Europe.

If your image of Daniel Boone is Fess Parker or if it in anyway includes a coonskin cap, this very readable biography will introduce a much more interesting, multi-dimensional man.  He worked closely and fairly with Native Americans, was a skilled legislator yet saw himself as a simple woodsman with deep ties to family and community.  And, as America moved west, he lived in some very interesting times.

Some of the many resources available on Daniel Boone in our collection include:

Additional resources that may be of interest:

The Filson Historical Society in Louisville, Kentucky provides information and resources about the history and culture of Kentucky and the Ohio Valley.

Also, The First American West: The Ohio River Valley, 1750-1820 at the Library of Congress contains  "15,000 pages of original historical material documenting the land, peoples, exploration, and transformation of the trans-Appalachian West from the mid-eighteenth to the early nineteenth century."