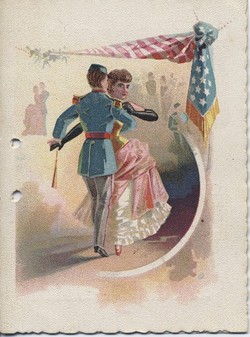 The card seen here is from a social event that took place on Wednesday, November 27, 1889. On that date, the Eureka Lodge, No.4 of the Knights of Pythias of Lynn, Massachusetts held their annual concert and dance on Thanksgiving Eve.  In addition to this wonderful illustration, the card  contains information that gives us a sense of what the evening must have been like - from the types of dances that were danced to the various dishes served at dinner. The program for the evening included a concert by Reinewald’s Eighth Regiment Band and Orchestra, a full military band.

The first part of the program (MA 015) was a set of dances including quadrilles, waltzes, contras, schottisches, followed by an intermission and supper.  According to the program, the menu consisted of roast turkey and cranberry sauce, chicken, mashed potatoes, various salads, cold meats, oysters, ice cream and cake, tea and coffee, and fruit.  Following dinner, there was more dancing, including more quadrilles, a Portland Fancy, a Danish, and a Redowa. Several of the dances are named for other fraternal groups of the time period such as “Red Men”, “I.O.O.F”, “K.G.E”.  These names refer to the Improved Order of Red Men, the Independent Order of Odd Fellows, and the Knights of the Golden Eagle.

Though the peak of participation in the Knights of Pythias was during the late-19th century, they still exist today, with headquarters in Quincy, Massachusetts. They are still accepting new members if you are interested.

Posted at 09:00 AM in Fraternal groups (not Masonic), Knights of Pythias, Posts by Catherine Swanson | Permalink | Comments (0)