What is a Liberty Cap? 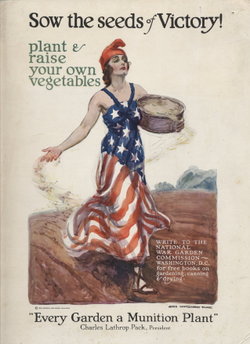 The VGW Library & Archives has a collection of over 600 World War I and World War II posters.  There are many well-known illustrators represented in this collection. One of them is James Montgomery Flagg (1877-1960).  He designed the 1918 poster “Sow the seeds of Victory!”

The woman planting seeds in the garden symbolizes America.  She is draped in an American flag and wearing a stocking cap called a Liberty cap.  This cap symbolized freedom and was used during the American Revolution and French Revolution.  Here, the illustrator makes reference to this symbolism for those seeking freedom during World War I.

The poster was produced by the National War Garden Commission in Washington, D.C.  They encouraged Americans to garden, can, and dry foods during WWI.  It is on cardstock, small in size, and meant to be placed in windows.